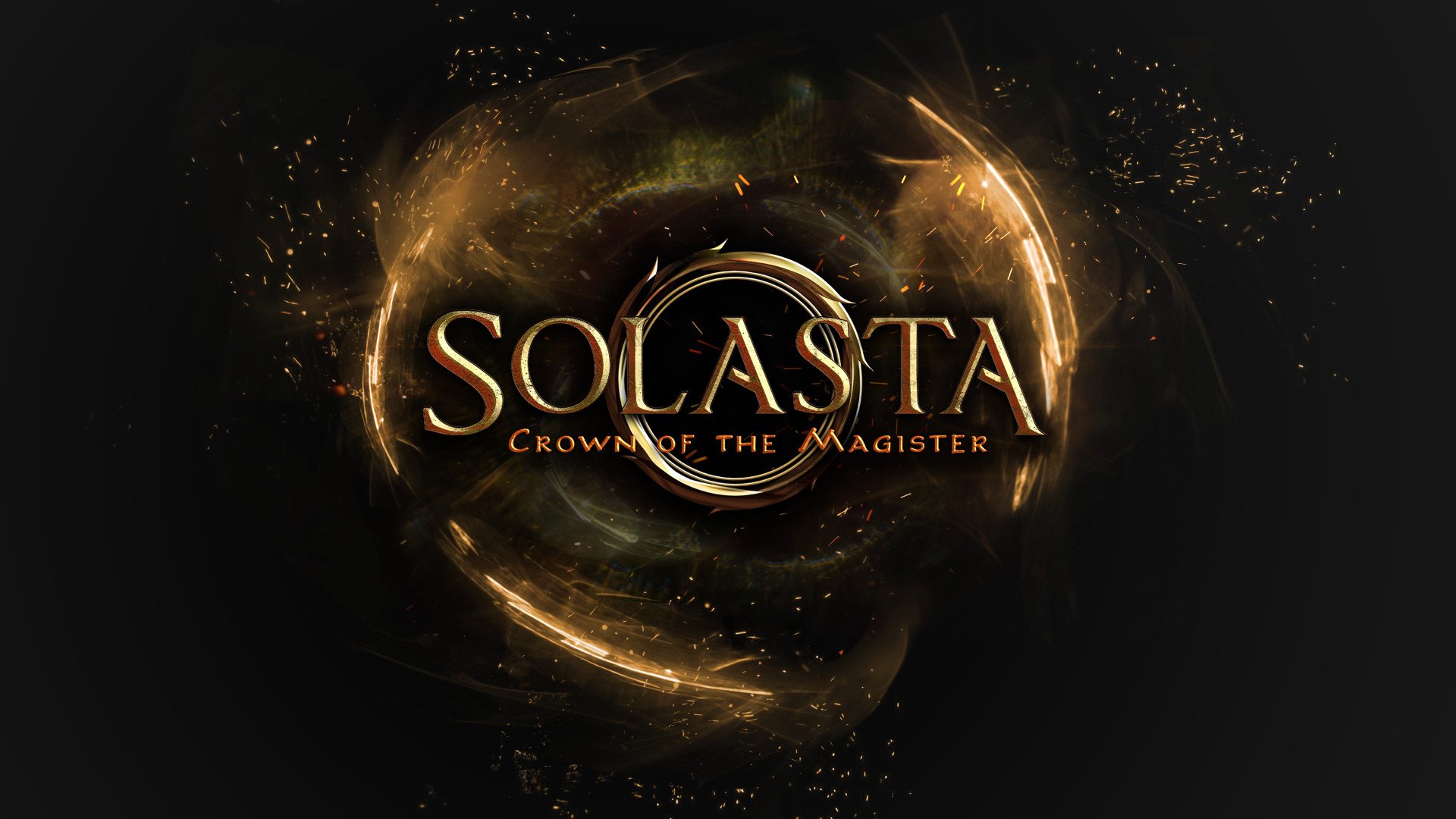 Hey there folks, Myzzrym here! 2019 is almost over, and what a year it has been. Care to join me on a trip down memory lane?

I first joined the company back in March 2019, and jumped straight into preparing the reveal of Solasta: Crown of the Magister - and trust me, we had a lot to prepare for. The only piece of information available online about our upcoming project at that time was an interview with Mathieu (our CEO) by VentureBeat dating from November 2018, where he pitched a Tactical RPG game on PC that would blend combat systems like XCOM with stories like Baldur's Gate. Those who ventured into our corporate website would also find an old (and now outdated) illustration, which conveyed our intentions for Solasta - a game centered around a party of four adventurers, exploring the depth of a dungeon and facing dangerous foes. 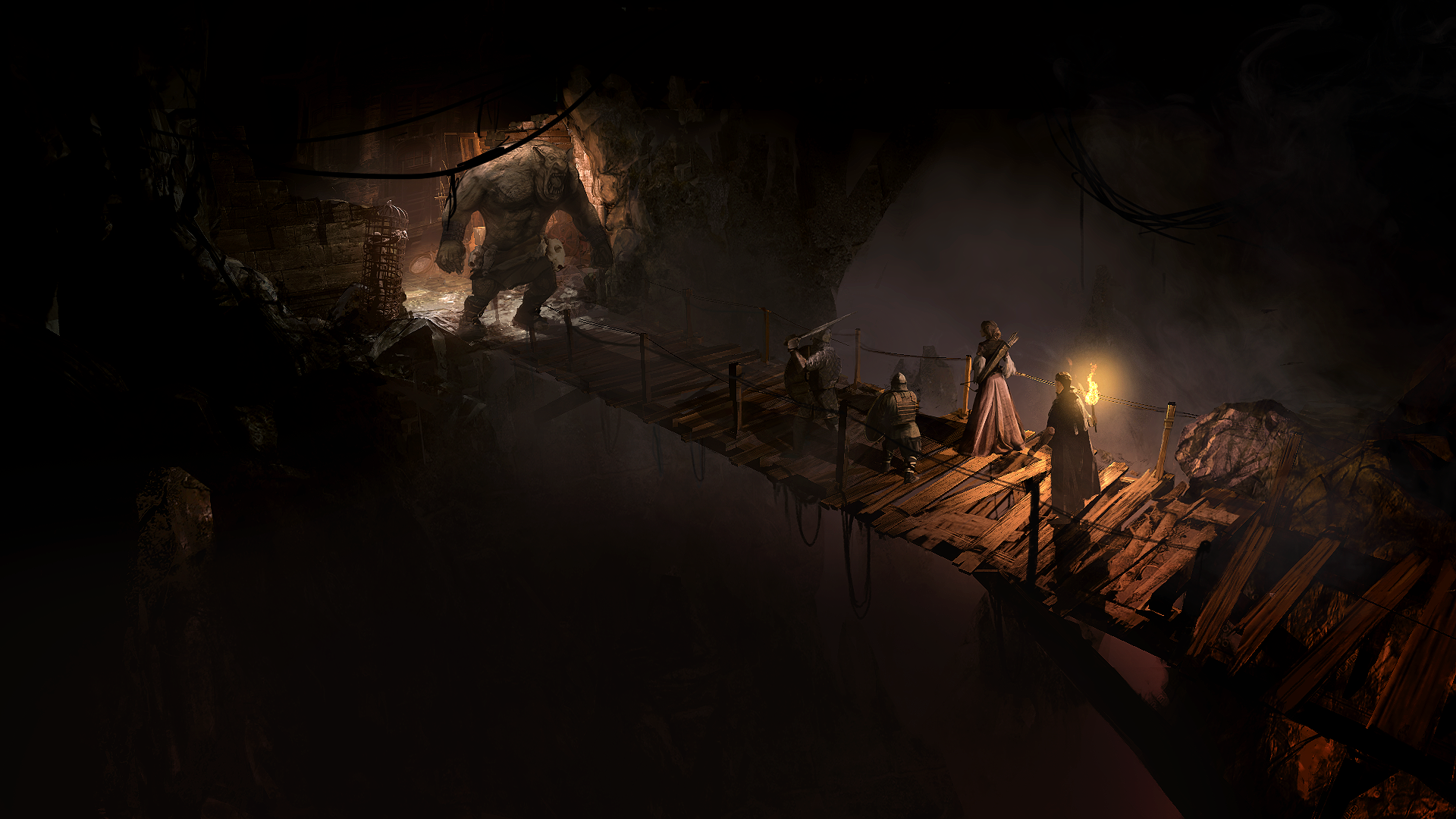 Both the verticality and lighting aspects were already present in this visual target.

It was on June 25th that we revealed our project to the world, by launching Solasta's official website with an announcement video and our animated trailer on Youtube. I invite you to watch those again, if only to see how much the game has evolved since - I even wrote a short article about the animated trailer back then! There are actually very few screenshots from that time, as we were in the middle of transitioning from the levels we made to show the prototype to partners, to working on the Ruins of Telema for the Kickstarter Demo - you can still find some of these on our website, although they will be replaced soon!

Here you can see bits and pieces of our two prototype levels, Hidden Cave and Orc Hideout (which had no Orcs in it), as well as some very early shots of Telema.

From there, we very quickly announced two things: that we were preparing a Kickstarter Campaign, and that we had a free Demo to go along with it. Truth be told, we were very busy during summer time. This was because we did not have until September (when our Kickstarter would launch) to work on the Ruins of Telema - we actually needed something stable as early as end of July to prepare for... Gen Con, Indianapolis. 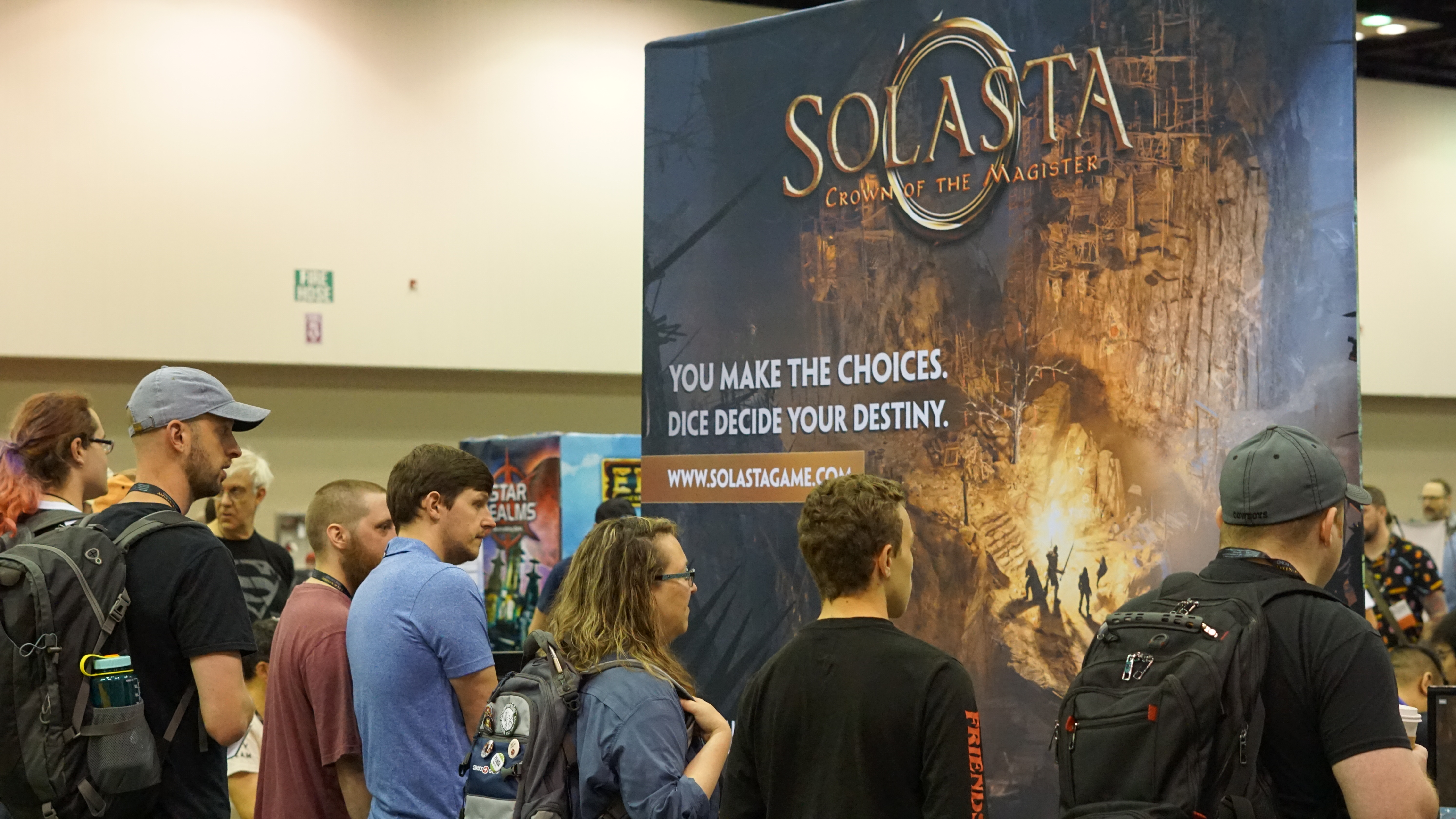 We've had the good surprise of meeting folks from D&D Beyond, WASD20 and Captain RoBear!

Gen Con was the first time we've put our game in the hands of actual players outside a few testers (mostly friends and family). It was both scary and exhilarating, and we soon found out Tabletop fans were just as excited as we were about Solasta! Our small setup with two computers was clearly not enough as we had people come and wait in line to try out the demo - some would even arrive early in the morning before us to make sure they could play! All in all we had a great time, and we're actively looking to go to Gen Con again in 2020. 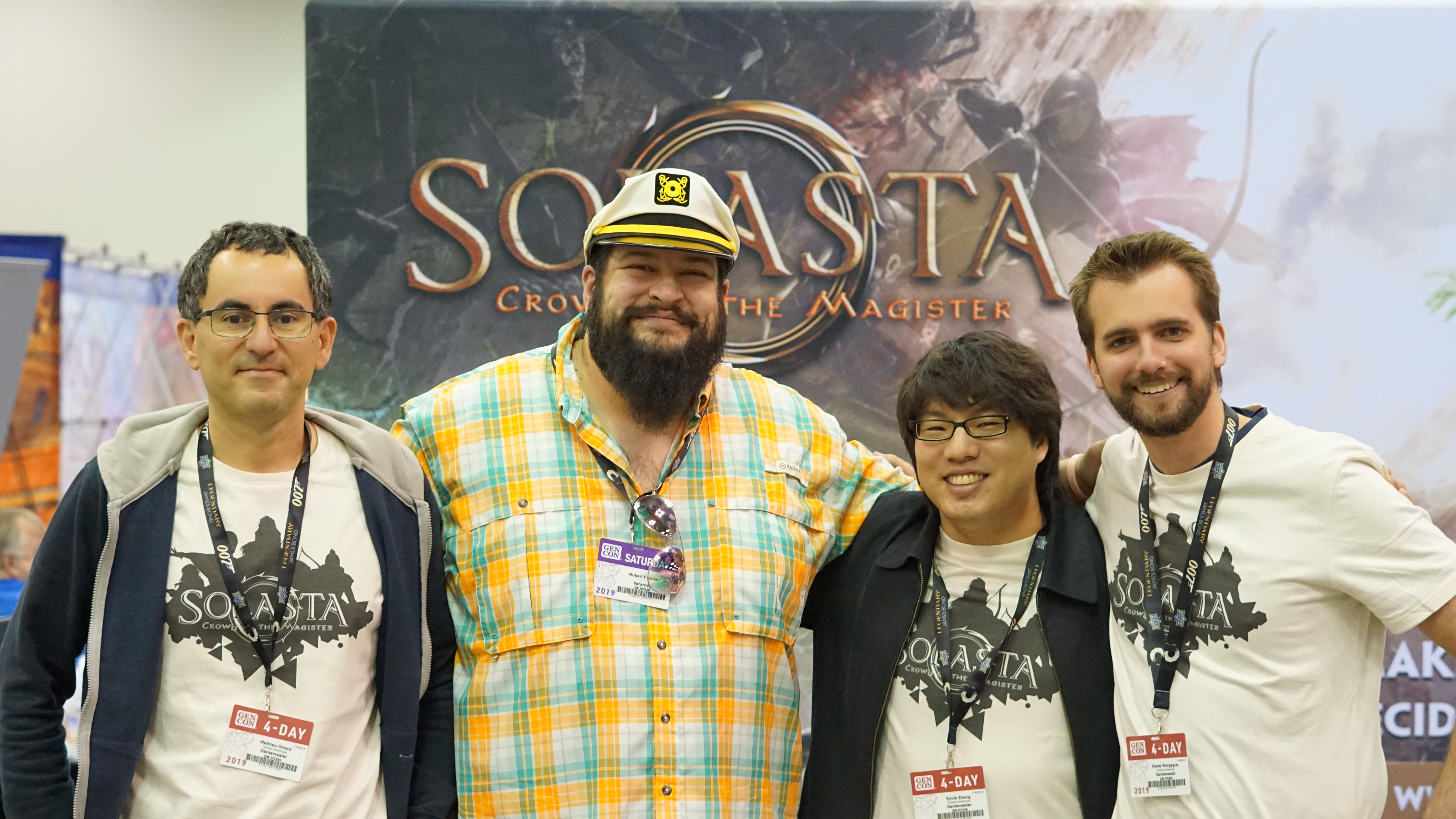 We'll be back. Well, at least we'll try very hard to be back.

This was only the first of three stops in a very, VERY busy month of August. After Gen Con, Mathieu headed to Gamescom in Germany. There he would meet a lot of journalists curious about seeing more about the game - landing us one of our most popular articles from IGN, as well as several others. For our French fans out there, we also had the chance of appearing in the JeanBaptisteShow video about Gamescom RPGs, alongside bigger titles like Cyberpunk 2077 and Bloodlines 2. Our last stop was Pax West in Seattle, which would announce the start of our Kickstarter Campaign. 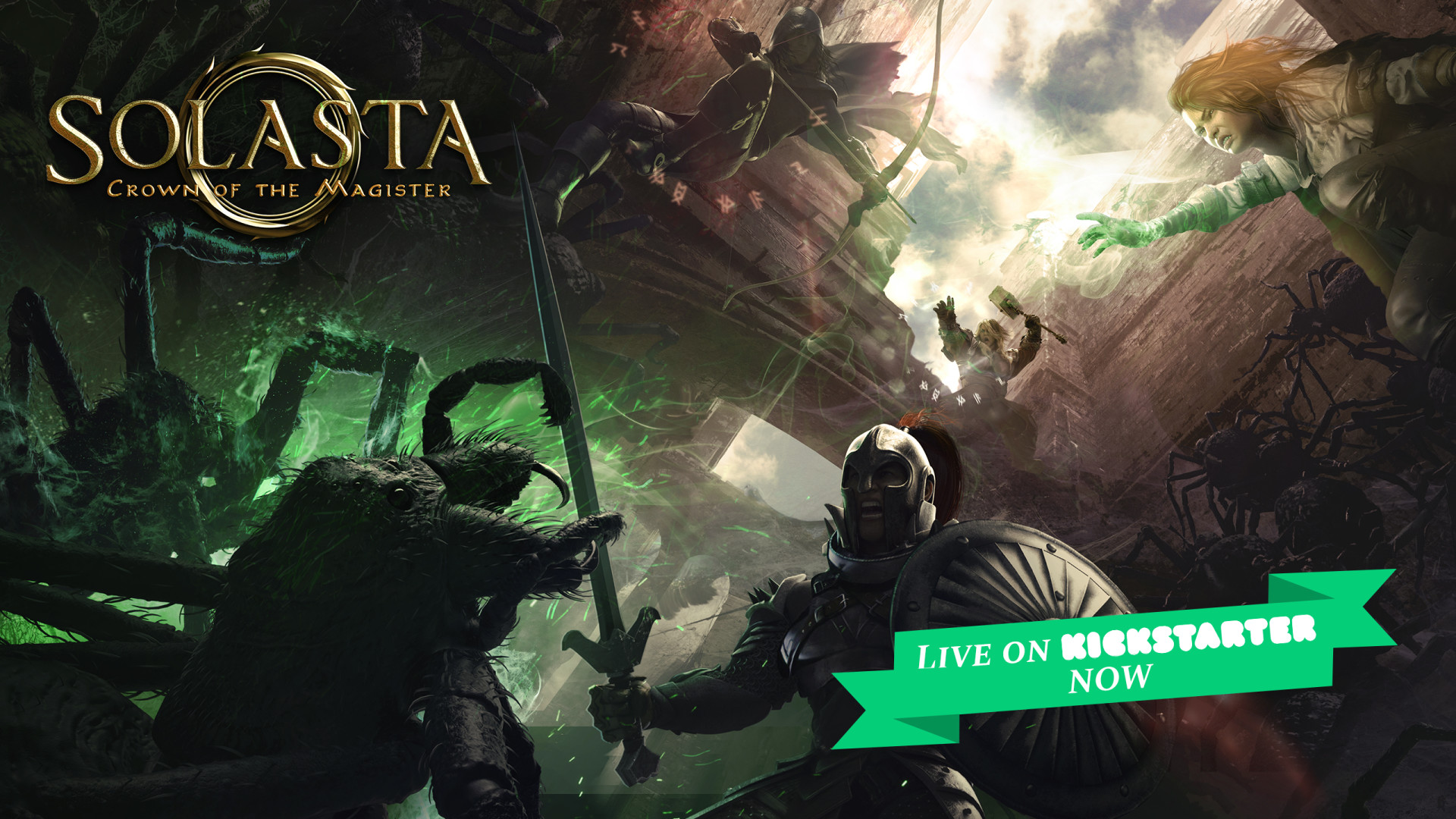 If you're reading this, chances are you saw this image somewhere on the net!

September 3rd, our Kickstarter went live! It was both one of the most stressful and interesting experience I've had so far in my video game career. Up until the very last day we would be making sure everything was perfect (it wasn't, nothing is ever perfect), combing every nook and cranny for small mistakes and issues. And what a start we had! More than 1,500 of you backed us in the first 3 days, alleviating a lot of our initial worries. The campaign was going fine, we quickly released a patch to improve the camera for the demo... And we announced a partnered stream with Critical Role. On September 13th we sat awake at 1:00 am to catch the stream live, and a wave of Critters flooded our campaign in support right after - it was very hard for us to leave our computers that night, as we wanted to keep chatting with these new fans. 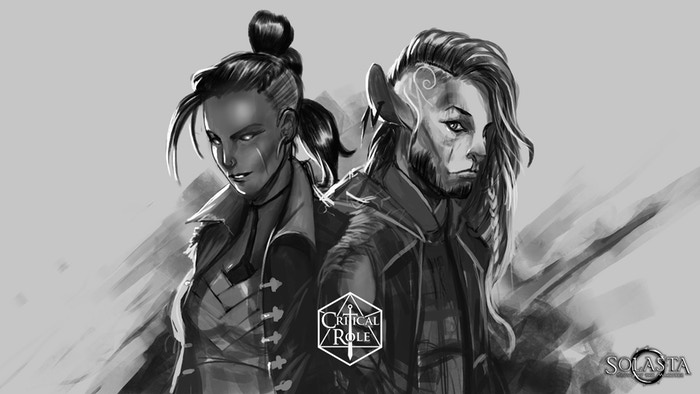 Our Art Director did a fantastic fan art of Beau and Cadeus for that occasion. Yes, Beau is standing on a box.

And last but not least, Cohh Carnage as a Guest Voice Actor! For those of you who may not know him, Cohh is a popular streamer with an immense love for cRPGs, and he has supported many other projects on Kickstarter in the past, such as the well-known Pathfinder: Kingmaker and Divinity: Original Sin 2 (which he very recently played through again). 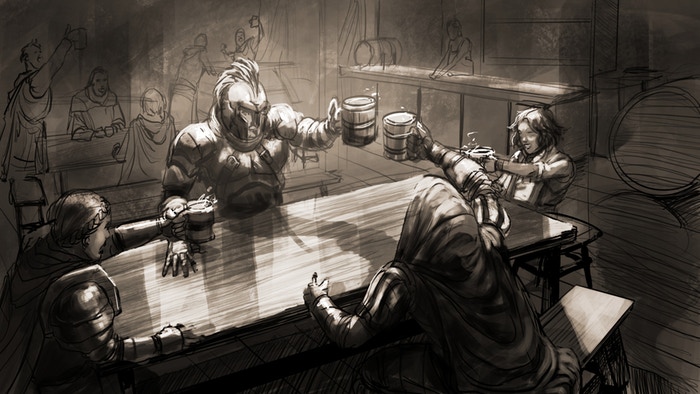 We all drank in celebration at the end of the campaign, though our cafeteria is much less glamorous than this tavern.

And so, on October 4th, the Kickstarter Campaign was over. After all that craziness, we went back to a more regular schedule of Dev Update articles to keep you informed about the latest additions to Solasta. We also took down the demo on October 18th as our final game would further and further distance itself from what we had back then, as was already the case with our new spells' VFX that replaced the old placeholder ones.

I hope you enjoyed looking back at 2019 as much as I did. See you next year!

i'm so hyped for this. keep up the amazing work guys ;)