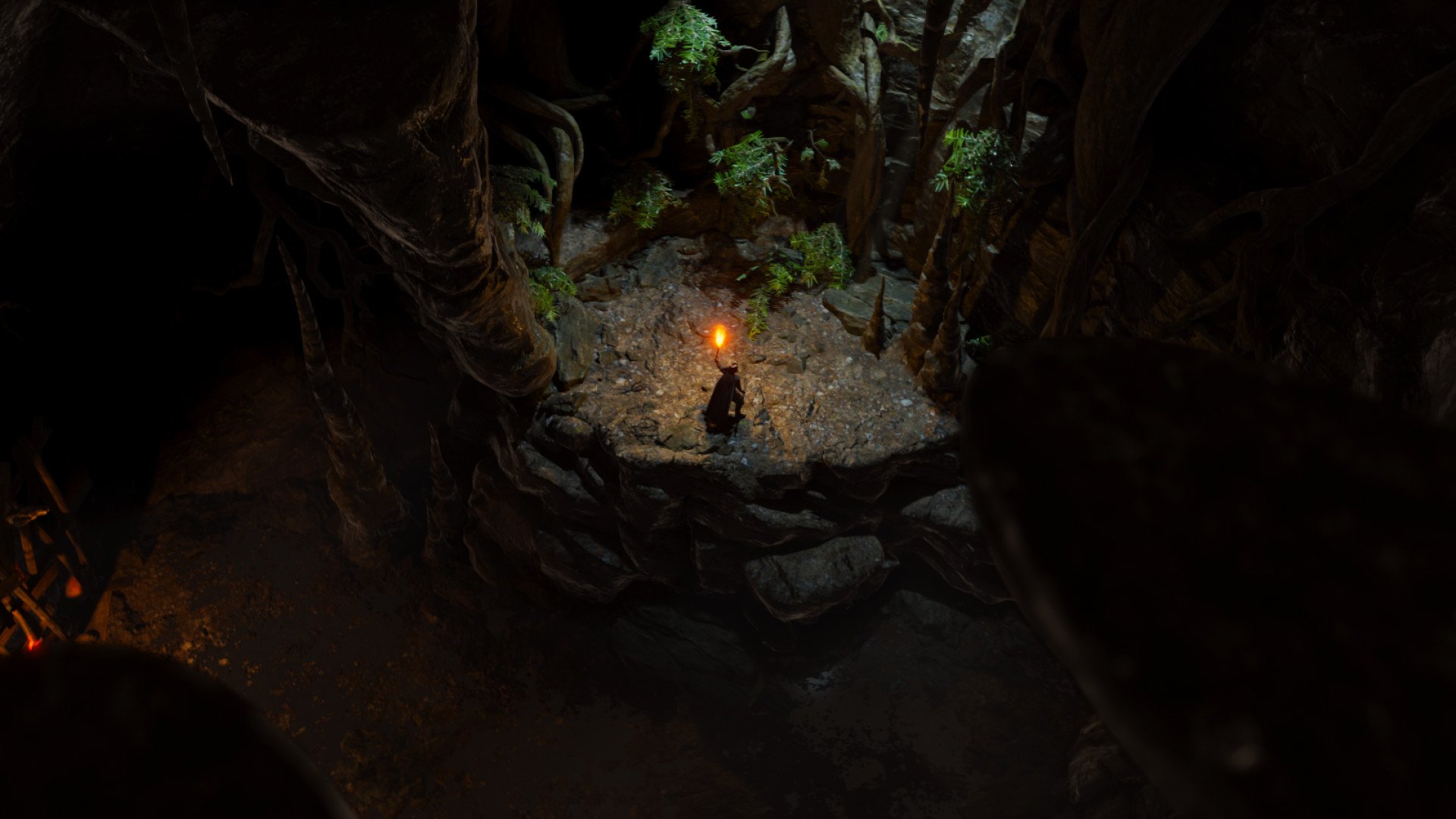 December's here, and that means we have yet another batch of amazing stuff to share with you. Take a chair, grab a cup of coffee (or hot chocolate) and let us tell you of the newest developments in Solasta.

What do you show new players when they enter the Character Creation screen? Sometimes, seemingly simple questions like these bring up quite a lot of discussions. Do we go for simplicity with a static, cool-looking concept art of the party? Wait... how would that work since the player is supposed to create his four characters from scratch? Who do we show on screen in that case? 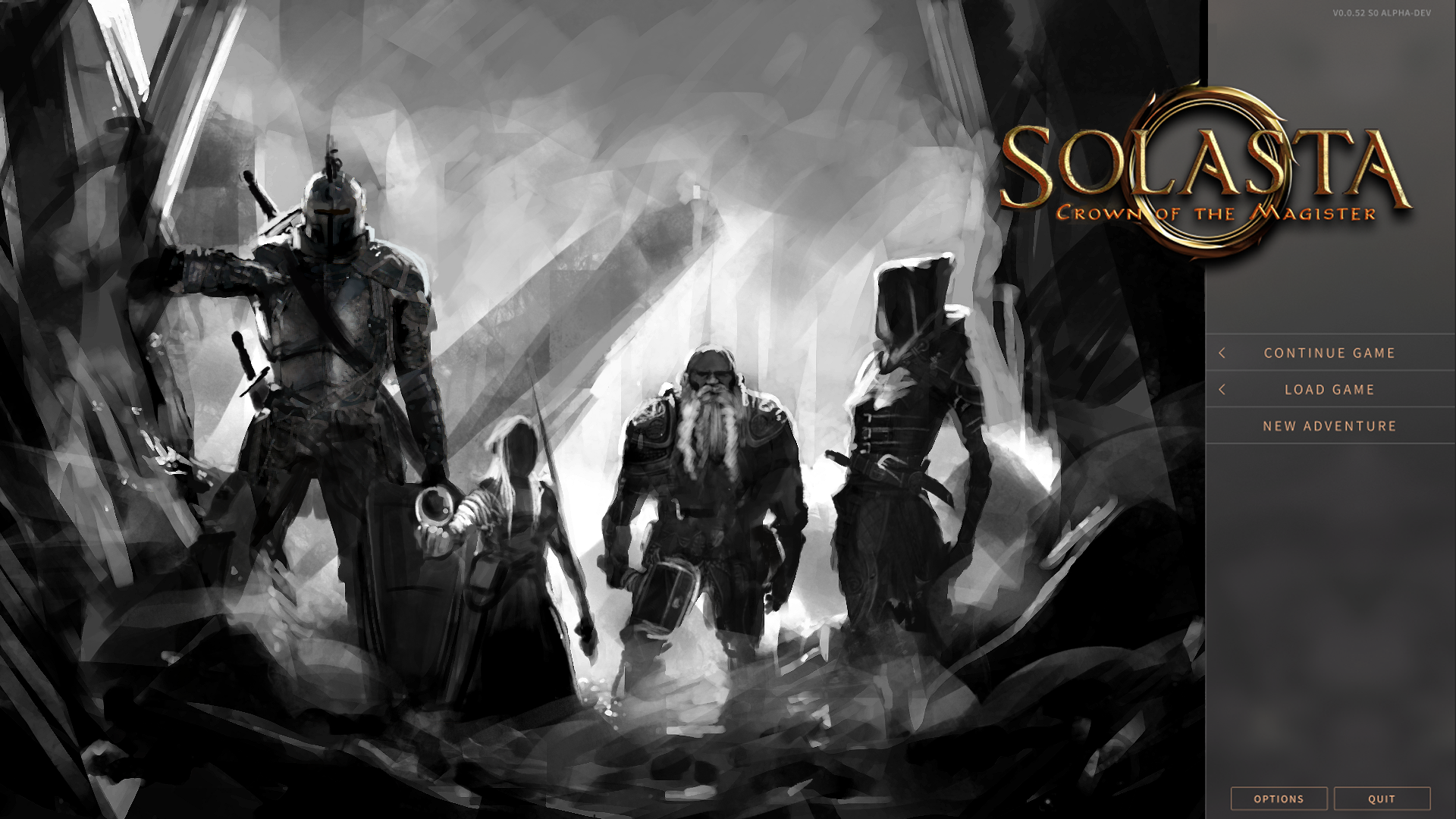 Research on a dynamic Character Creation landing screen (sketch), which would display the 3D models of the characters you create.

While we're still early in development and everything can be subject to change, our Art Director proposed we go with a dynamic landing screen. By default, you would get four pre-generated characters on screen - and clicking on one would take you to the Character Creation screen where you can switch them with your very own creation, changing the Character Creation screen accordingly every time you swap party members.

Speaking of Character Creation, our Concept Artist has started working on a wide variety of haircuts, beards and moustaches! Note that haircuts and facial hair can be chosen separately, they are not linked together. 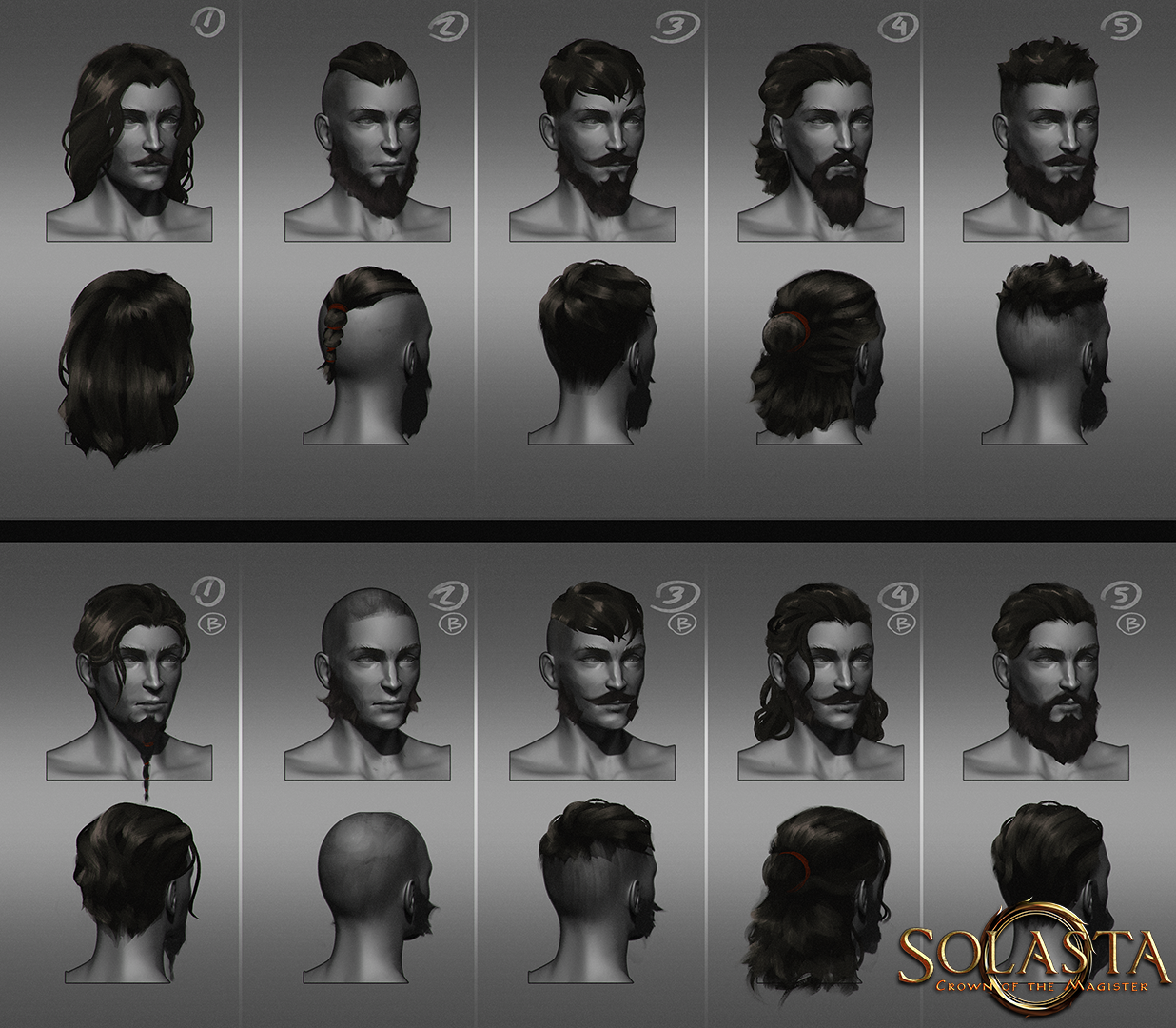 Picking up adventuring comes with a complementary trim at the nearest barber shop.

We've talked a lot about adventurers and their ilk, but what about the true citizens of Solasta? Those who are shunned by the more "advanced" societies just because they happen to enjoy a little bit of violence and murder. Discrimination, that's what. Of course, it would be hard to have a good High Fantasy setting without the classics. Orcs... and Goblins! You've already met your friendly orc neighbours in the Ruins of Telema (and perhaps even enjoyed a fair few rounds of fisticuffs, they do so enjoy physical activities), so prepare to greet our Goblins!

Now that their 3D models are done, our lead animator Grégoire (who was the guest of our previous article on Animation) is going to spend a good chunk of time bringing them to life! Walking, running, attacking, dying... There's plenty to be done.

Aside from Goblins, our Concept Artist has also worked on bringing some wildlife to the world of Solasta. Behold the wolf! 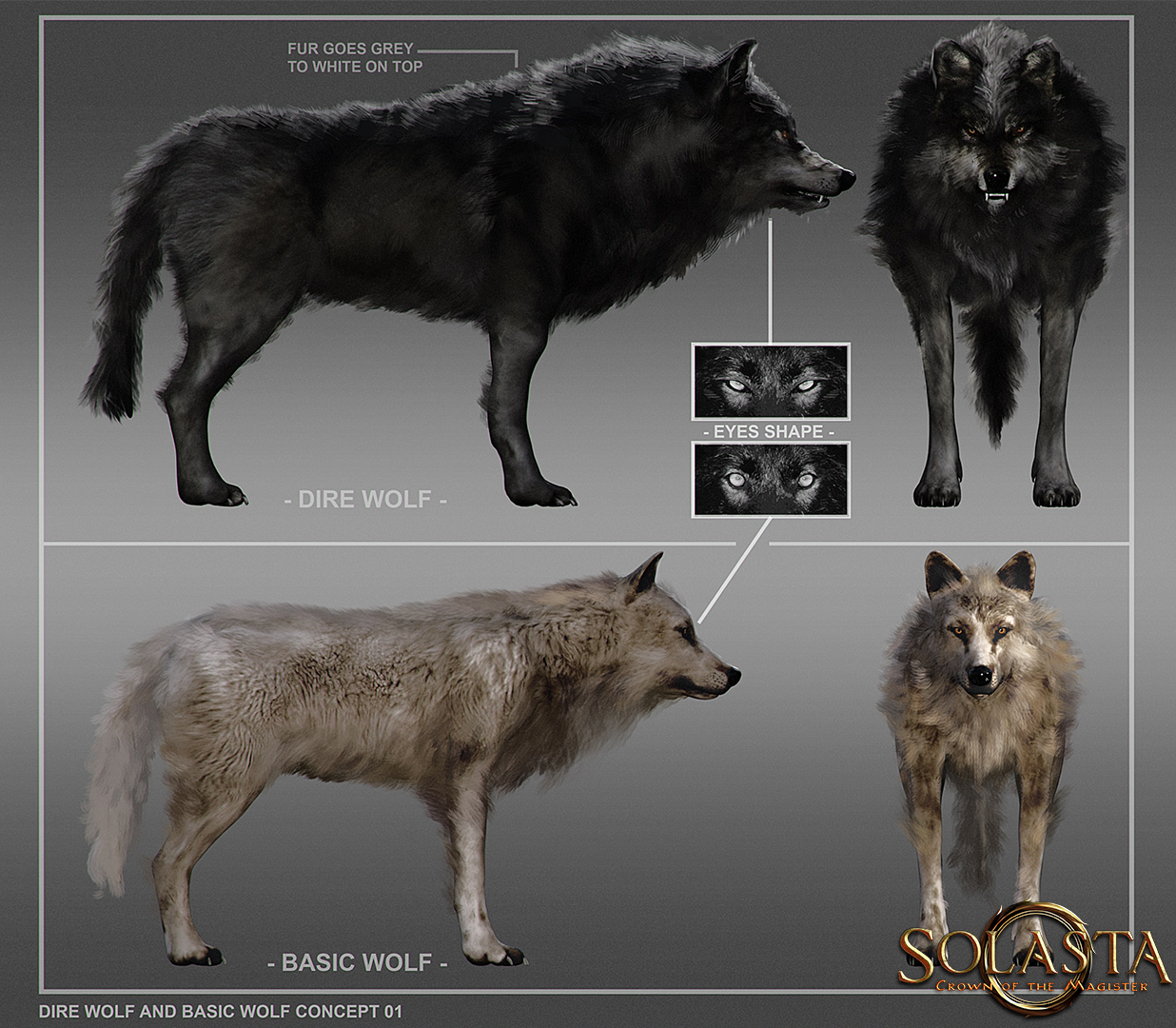 Our Art Team wasn't the only one hard at work, as our Design Team has been working on some new levels that you'll get to enjoy. We don't want to spoil too much by giving away location names or showing too much of the level itself, but here are a few gifs to enjoy.

Watching your neighbors over the fence as they are doing a barbecue and didn't invite you.

Close-up of the totem in-game

One of the much-needed features that we couldn't implement in time for the Kickstarter Demo was a functional 3D Map of the level so that players wouldn't get lost in the level. We haven't forgotten about it, and we are now testing a new version that's already working much better than the previous one. Note that it still looks very rough for now, and we plan to remove some elements to improve its readability. 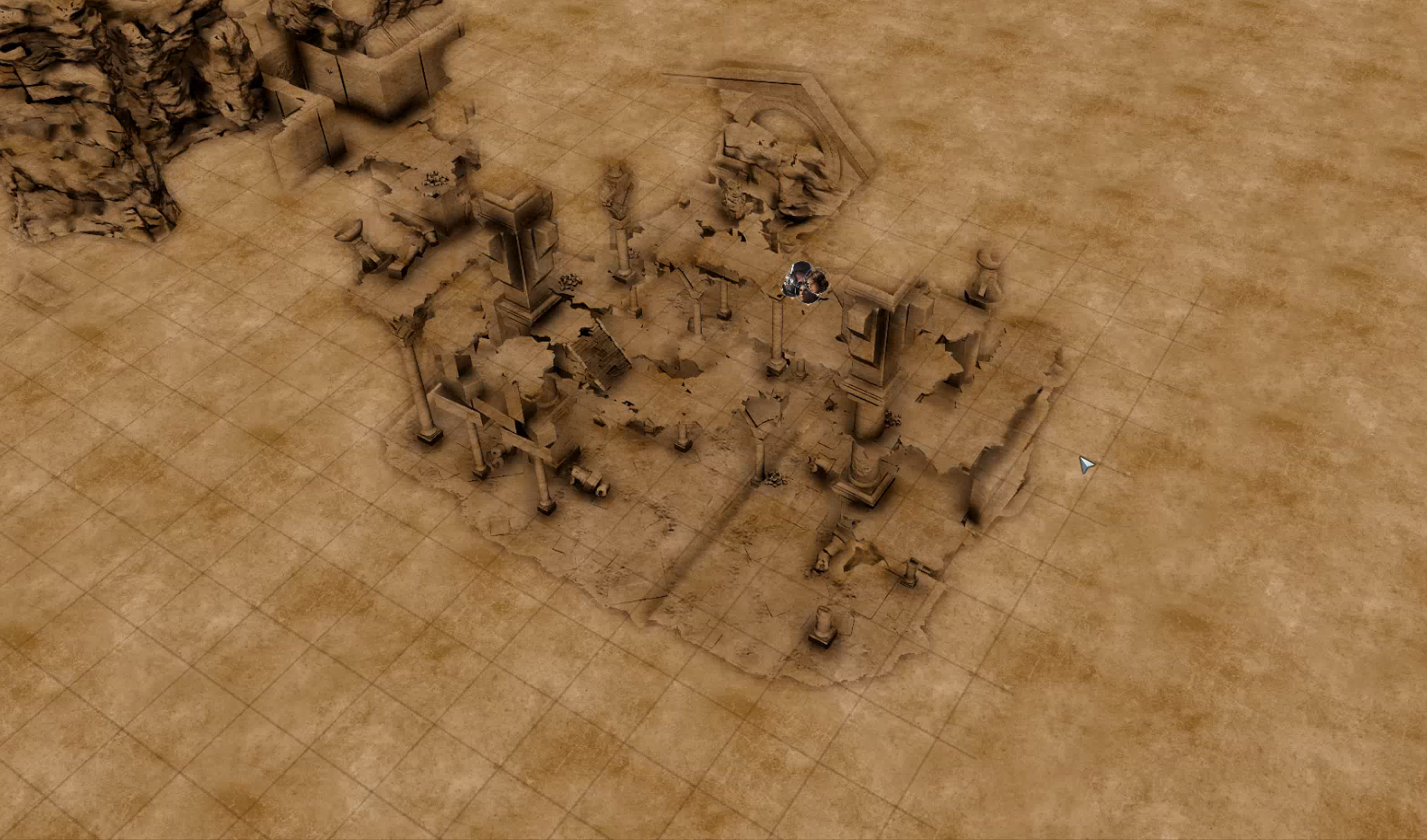 You'll be able to move the map around, zoom in and maybe even fast travel from there.

We've also created a tool that adjusts the water level of the ground to add muddy pools and make humid caverns look more realistic! Hopefully those are tools that will be available for the community once the Modding SDK is made public.

We're now reaching the end of today's update, which was packed with a lot more visuals than usual! I picked a few spells and animations from our FX artist and lead animator for the finale - we like to leave the best for last.

Rapier attack animation, minus the rapier since we still need to make it.

That's it for today! Among what you've seen today, what made you the most excited? Please do drop a little comment below as we always enjoy reading your messages :)

Myzz compliments all the animation department, graphics, etc. etc. The assets you show every time are really high quality. Those wolves are amazing !!! The outside map looks like a very gloomy and very interesting forest to explore ... I can't wait. The new home screen is really good and fits perfectly with the UI we saw in the demo. Another thing I can't wait to see and the creation of a PG from the beginning to the end already the old screens were interesting but to see also the personalization of the aspect is a must :D