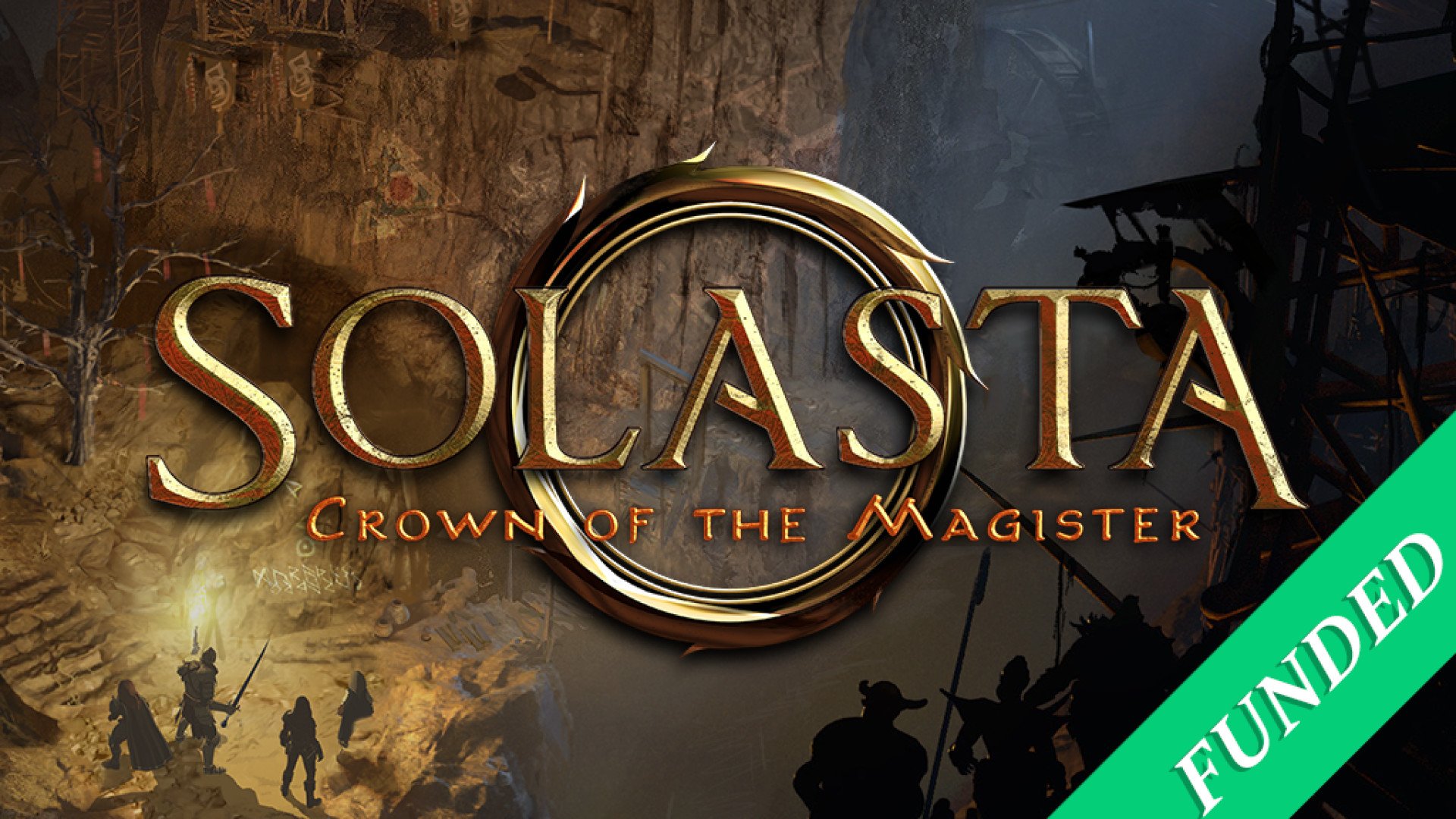 Over the past few months, we have given you regular production updates on what we have been working on. I thought that now would be interesting to share the bigger picture with you.

And it is thanks to you!

The Kickstarter Campaign has been a great experience for us – be it on the production, community or financing side. As we hoped for, the additional funds will allow us to add more content. You have joined us as a community, providing feedback, suggestions… and also reassuring us on the interest for Solasta, for it is always a leap of faith to start working on a new game! Don’t worry, we also know we have to improve the camera system 😊 and we are working on it.

Something that’s probably less obvious is that the production of the Kickstarter demo has been an amazing learning experience as well. It required us to set up a production pipeline very early in the development cycle, and forced us to confront challenges that usually only appear later when working on a video game. The Ruins of Telema were a boon because it was a “stand-alone” dungeon: we had to face not only the complexity behind designing a level with verticality in mind, but also keep an eye on balancing encounters and cutscenes to avoid slowing down the pace too much. 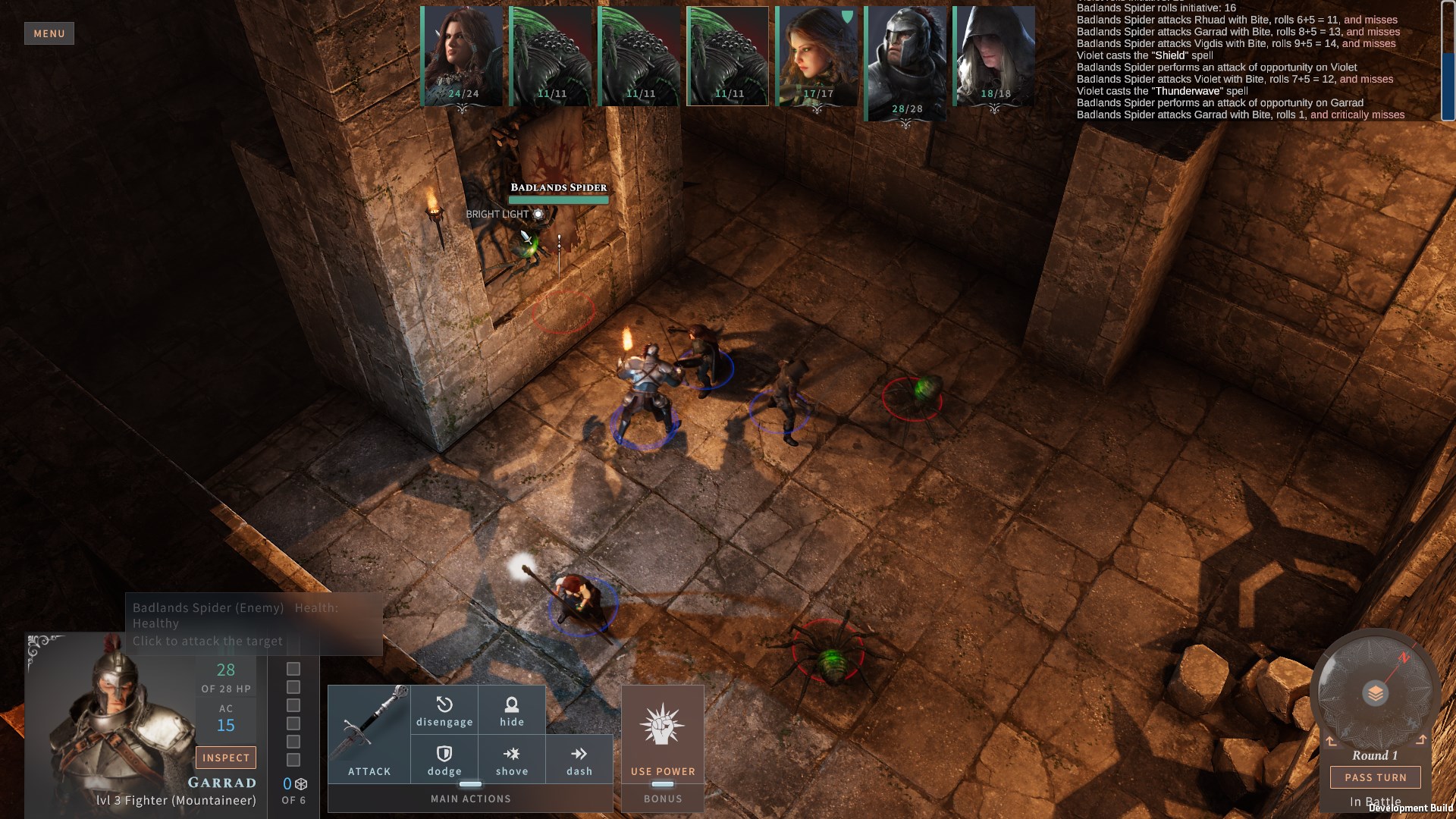 I think one of the biggest findings is that it’s really, really cool to have a demo showing off the quality level we'd like to achieve . Some Kickstarter projects only have a trailer, others a very early demo without sound or full of placeholders… We wanted to give a slice of what could be the final game (within reason of course), which is why we did some voice recording, had some music tracks produced and even added some last-minute tool-tips and tutorial elements. Obviously, we were trying to convince you that the game will be good, but it was also very useful for us – we get to tackle questions and clear some of the unknown before entering full Production. The state that we reached was critical to me, because it resonated with my passion for the MVP principle. But what is exactly MVP? 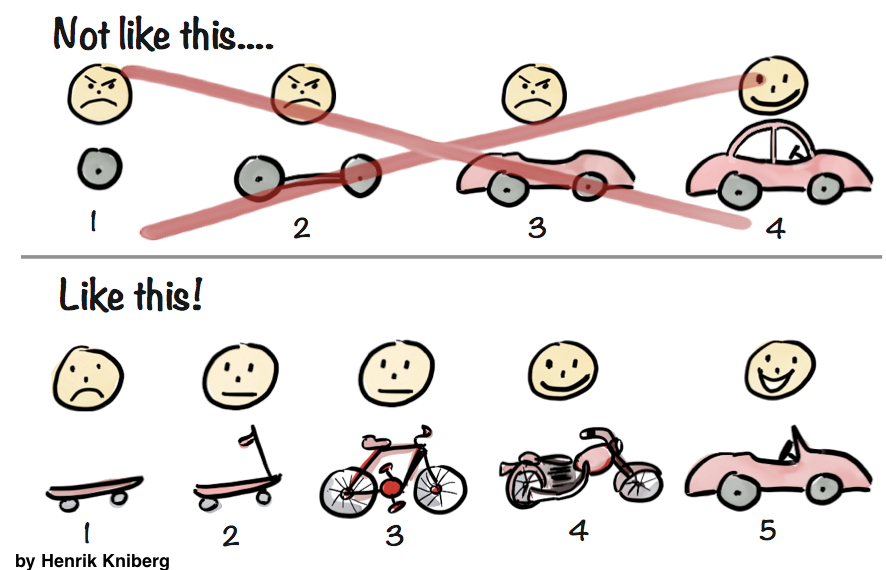 MVP stands for Minimal Viable Product. It might be obvious for some because it is a well-known principle in Web / Apps development, but it isn’t really widespread in the video game industry. In a nutshell, MVP focuses on producing something step by step, by fulfilling the first requirements set by the user, without working all the details and options, before moving towards the next step. In the picture above, all items in the bottom row depict a mean of transportation – you may not need a car when a bicycle would suffice! Not to mention your wallet would sing a different tune if you got one or the other.

In the video games industry, projects are becoming more and more complex, with large teams of sometimes several hundreds of people. The way they are planned, organized and divided into tasks often end up with a “waterfall” pipeline where the game evolves through conception, prototype, production, alpha, beta and release stages. But it is rare to have a glimpse of the final product until the end, leading to some projects failing and a lot of frustration for the team. It feeds the “wait and see” mentality, where even if things don’t look too good, you always hope everything will be fine when you assemble all the pieces together at the end. 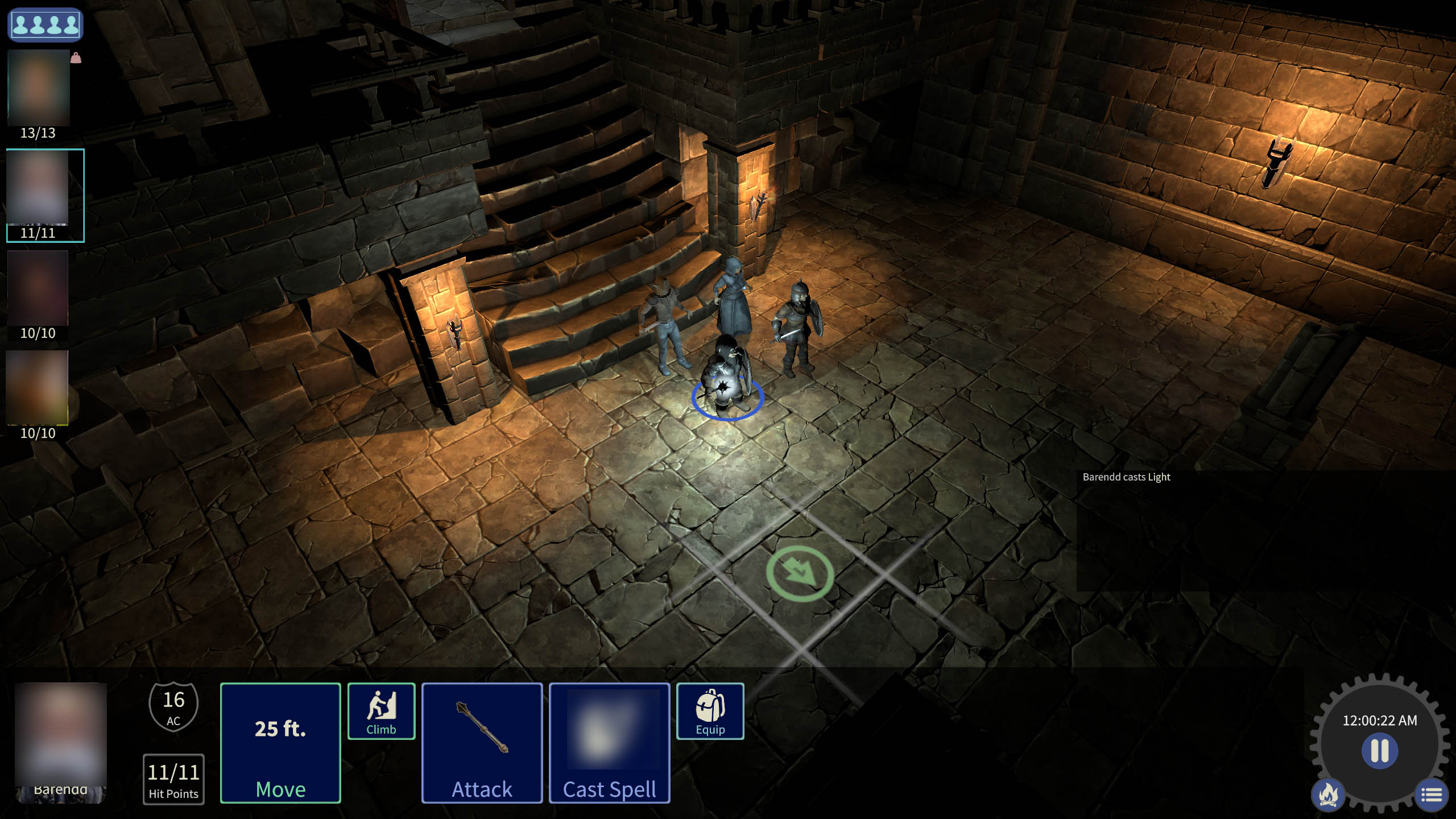 Our first prototype was fairly rough! But you could still play it, and that's what's important.

Before the studio was staffed and we had offices, I started a first MVP focusing on showing the game core pillars: character creation, dungeon layout, exploration mechanics, basic character presentation, combat, a magic system, and GUI to use all that. I did not go into all the options and details, nor did I make “quick and dirty” code: I did the best I could for the objectives I had within the 9 months I gave myself. The result allowed me to show this project to others, demonstrate how it worked – and from there, hire a team and secure initial funding. Once this MVP cycle was done, we aimed for a new one: adding visual polish, lighting, new textures, to convince even more people, get more funding, and understand how far we could get. The next MVP cycle was building an FPP (First Playable Prototype) which rapidly became the Ruins of Telema (which you now know as the Kickstarter demo).

Working with an MVP approach is not simple: many people like to keep the big picture in mind and worry about covering all the bases from the get-go, which can significantly complicate and slow down the production cycles. Keep in mind that it is far easier to use the MVP approach when you are a small and agile team, which is also one of the reasons we’re using this method. What is also essential is to understand than the MVP must work in pair with refactoring (which means going back in existing systems to improve them). When I developed the first prototype, I needed a quick minimal AI for the monsters, and used a simple machine state simulation. As it proved totally inadequate for complex situations, our AI programmer then replaced it with a more advanced AI system. Refactoring takes a bit of time, but you get to know what you need to change and improve because you get to test the previous system in-game. On the other hand, the classical approach would be to design a full-fledged AI on paper at the start, and then hope it works as well as you imaged once it’s fully implemented in-game (plus sometimes you realize that half of the work you did was pointless because another system was removed from the game later due to lack of time).

But there is one nagging question here… what about quality? 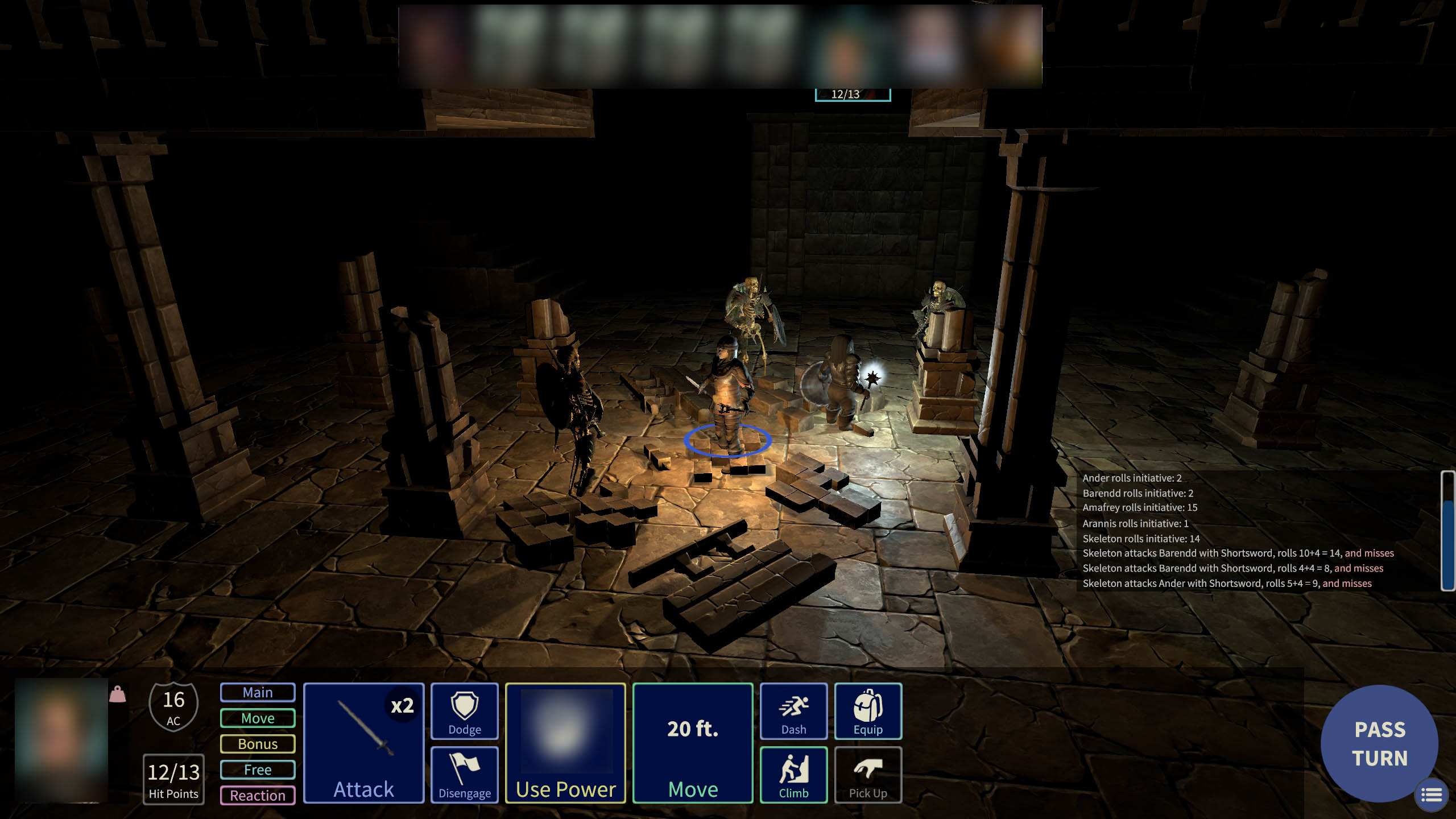 I can tell you, these skeletons were NOT smart. But they did the job!

With the MVP method, one may think that quality is not most crucial point of the process. It could be considered slacking and doing sloppy work, as you cut the chase to the most immediate result. One might even argue that it could be a way for us to be cheap and deliver an incomplete game. But it is exactly the opposite: because we rush asap to a playable result, we have ample time to improve, polish, refactor, and start the cycle again. Increasing a game quality is also a very satisfying moment for the team after you hacked your way out of the jungle of features development, and the sooner the better thanks to MVP!

Another thing that was really nice with the Kickstarter demo was that we got meaningful and detailed feedback since the demo was a fairly representative vertical slice. By placing the customer experience higher up in our list of priorities, you get more interesting feedback than with a buggy / obscure prototype. Obviously, that is easier said than done 😊 This also helped us decide to develop the rest of the game in a similar way as the Kickstarter demo. We have cut Solasta into different acts and started from the very beginning of the game: creating the party, playing the introduction, exploring the beginning of the campaign, exactly like the player will do when they start playing the final game.

We're working on Act 1 as we speak, but we're trying to limit spoilers.

Therefore, our new MVP objective (what we are working on right now) is building what we call the “Exposition” of the game, meaning the first few hours the player will get to enjoy. This requires creating many new systems, content, and levels compared to what we had for the Kickstarter. Among others, we must have character creation and customization, classes and archetypes, introduction and tutorial, world map and navigation, first campaign missions, and lots of stuff I cannot speak about right now. I know that a lot of you might be very eager to play Solasta, but we want to make sure to reach a certain level of quality before placing it into your hands – and we also don’t want to have too much of the game spoiled for you. That being said, keep an eye out for updates – we do want to give our community a little something!

That is pretty much it for today, aside from another topic that emerged from Kickstarter feedback: Content and Modding. This subject has become a priority and we are also working on it - we will provide you with an update sometime later.

Thank you for your attention!