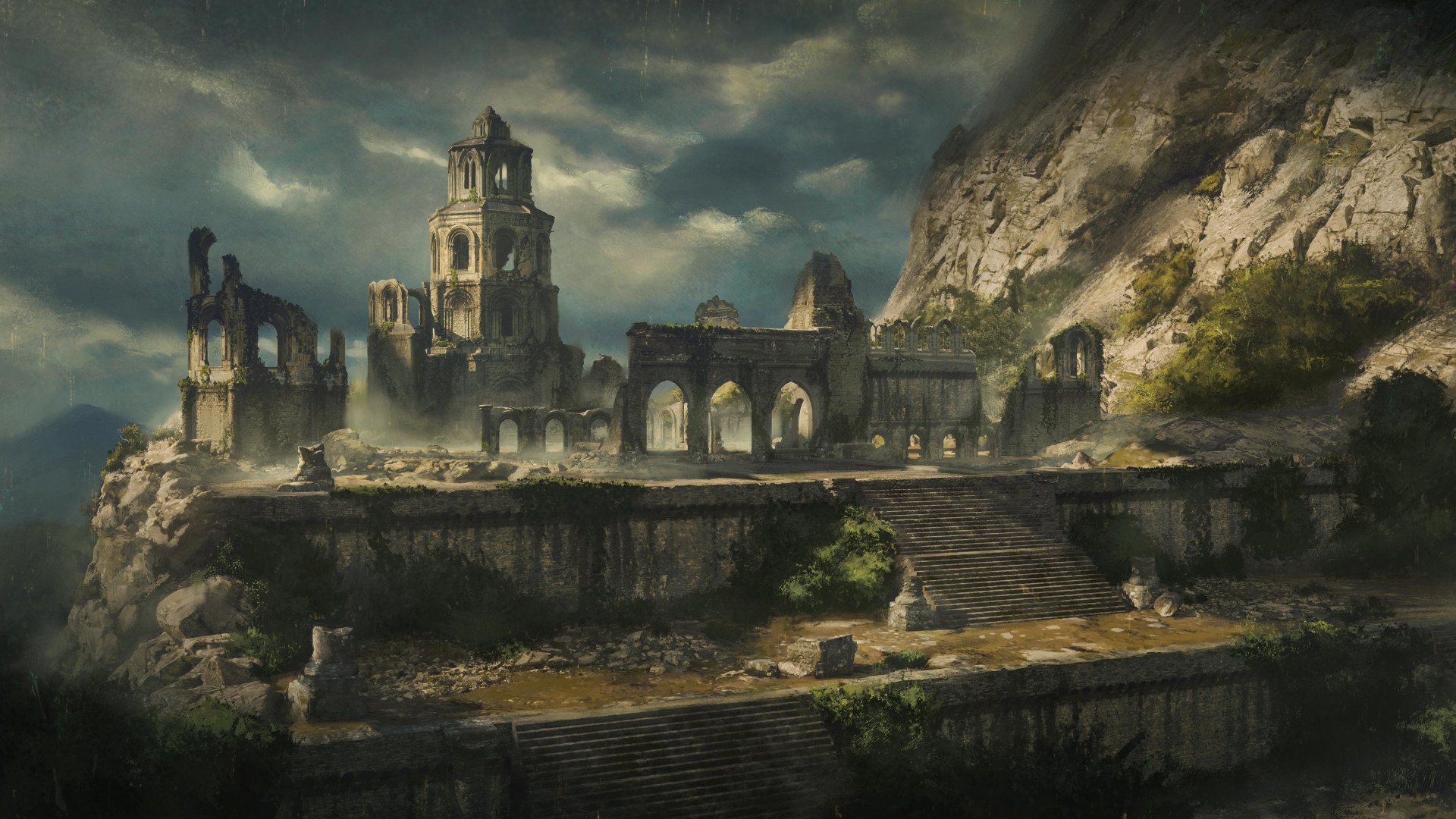 Hi there you beautiful people!

Today we'll be talking about something a little different than usual - we're going to be showing the advancement of our Kickstarter rewards (both digital and physical). While not everyone may be directly affected by it, you might still find it interesting to know how certain things came to be in the final game! 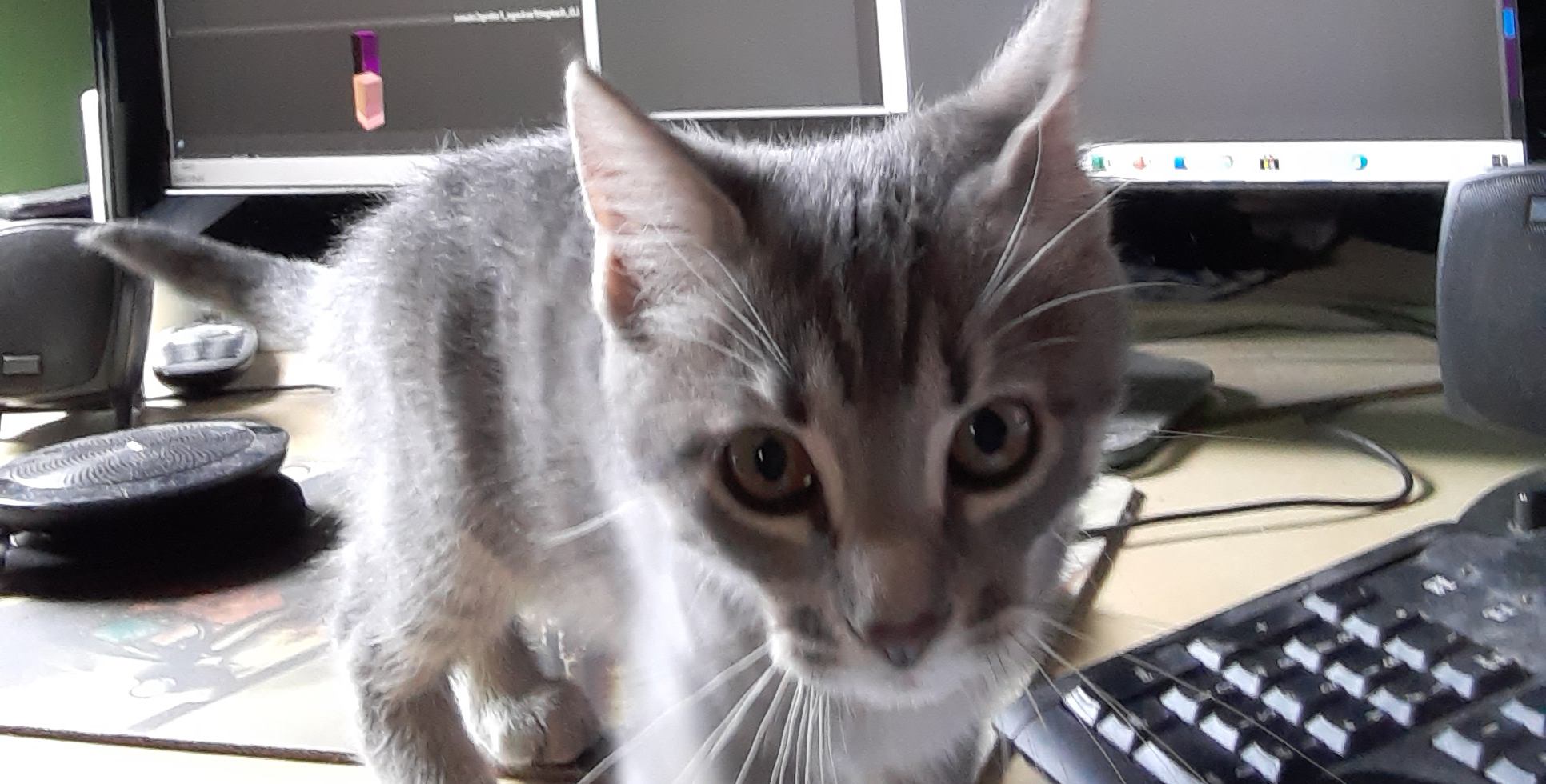 If you've launched Solasta recently, you know that most stretch goals such as the additional classes (Paladin & Ranger), backgrounds (Lawkeeper & Academic) and ancestry (Half-Elf) are already available in-game. But what about the rest?

Full Orchestral OST: For those who aren't following us on Twitter, you probably aren't aware that we've just started our orchestral recording a few days ago. Percussions, brass instruments, wind instruments and cord instruments (as well as vocals) will be recorded separately over the next week - and with a bit of luck, we should be able to share with you a behind-the-scene video made by our audio partner G4F! In the meantime, enjoy a few pictures from the first recording sessions.

Drums are done, brass instruments are next!

Epic Quest: As this optional quest will pit you against the monster voted for by the community during the Kickstarter Campaign - a very dangerous CR 11 Remorhaz, it should not be attempted until during the later stages of the game. In its current iteration (remember that before the game launches in 1.0 there are always chances that changes can be made), you will be teaming up with good old Merton to venture deep into the Badlands, into the temple of a long forgotten god... 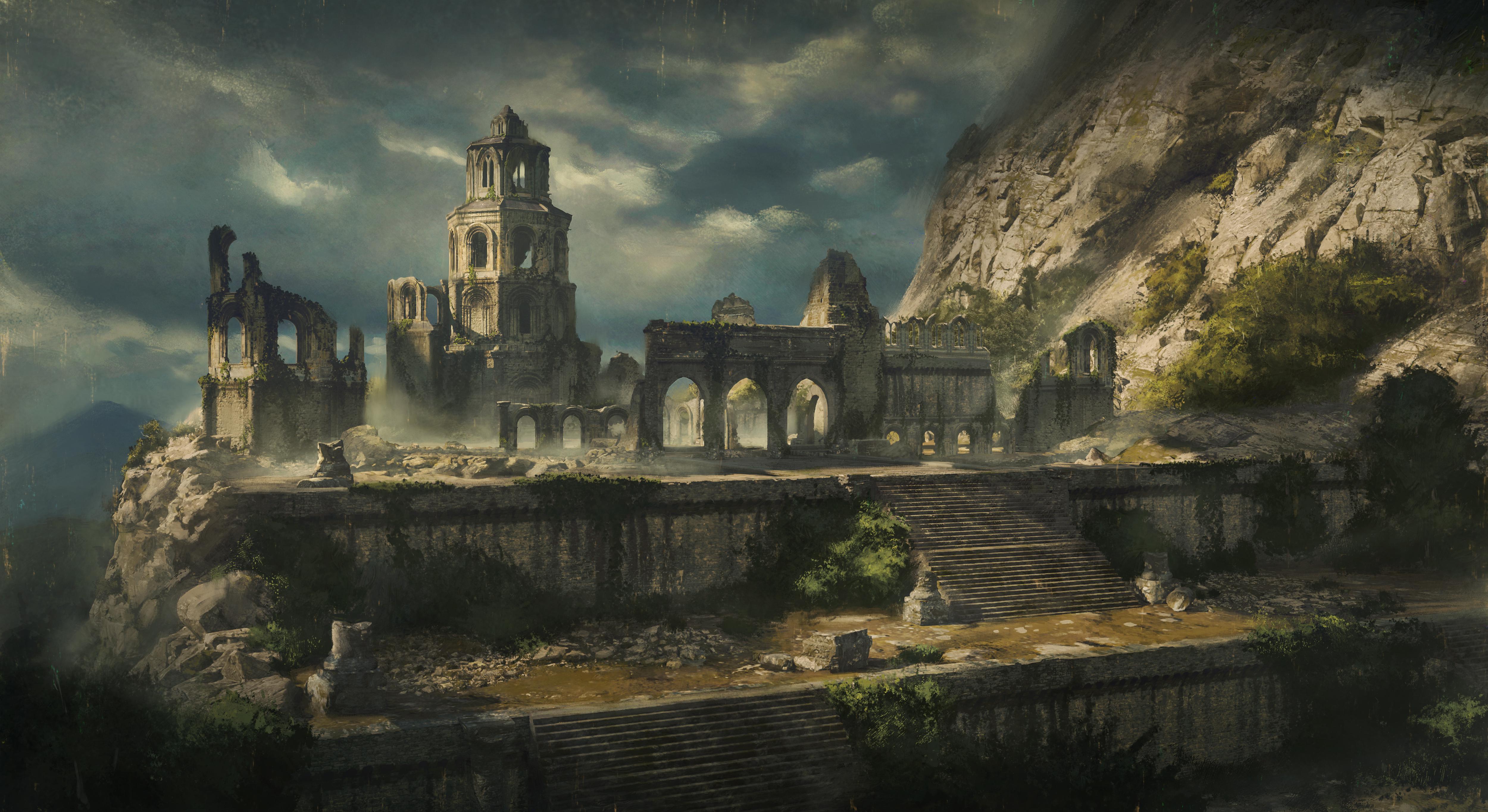 Think of the treasure though! Riches beyond imagination, power beyond belief!

Sorcerer Class: As a reminder, we have promised the Sorcerer as a free post-launch DLC - and we haven't forgotten about it! In the months following the 1.0 release of Solasta: Crown of the Magister, we will be working on releasing the Sorcerer class - along with other things... 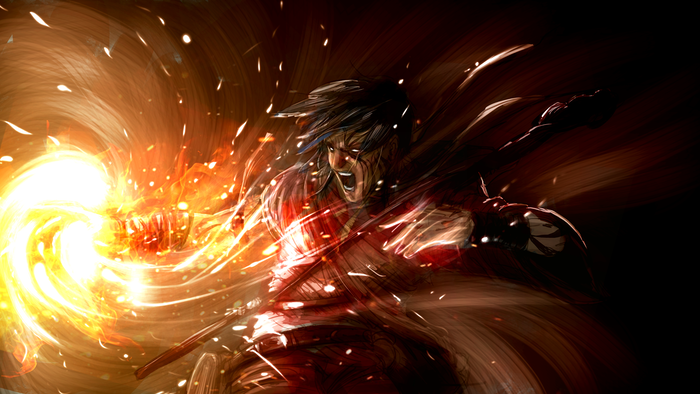 The winds of magic welcome the Draconic Bloodlines, the Mana Painters and the Children of the Rift.

World Map Digital File: Someone once said "Explorers are never lost, they just do accidental field work" - and trust me, you're going to be doing a lot of field work in the Badlands. Keep in mind that the World Map will only cover the regions explored in Solasta: Crown of the Magister, the actual world of Solasta is actually much vaster than that. 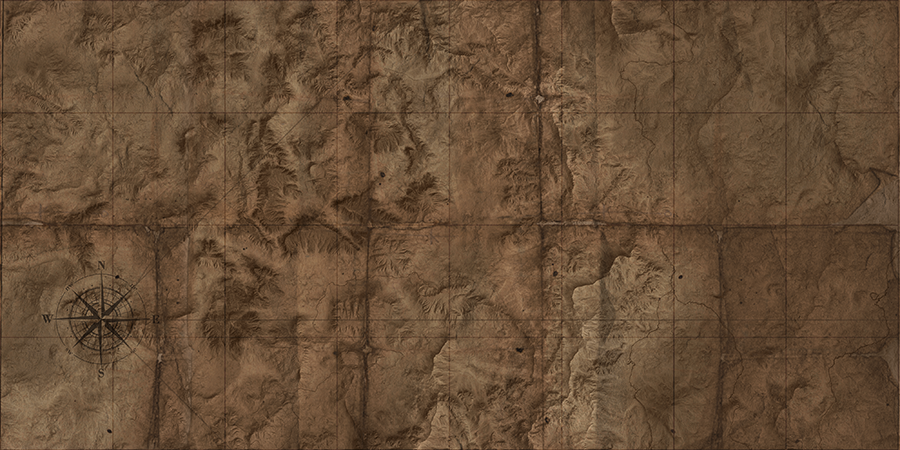 Current version of the .PSD file which will be made available at launch to backers (missing labels and locations for now).

Monument of the Dead: The Cataclysm left many unsung heroes in its wake - be it brave soldiers who stood against the Soraks, unwavering healers who treated uncountable wounded people or selfless travelers who stayed behind to guide as many refugees as they could. While most were forgotten with the passage of time, some names were recorded and engraved into the Monument of the Dead.

3D Concept Art of the Monument of the Dead which will appear in-game, where the name of some backers will be engraved

Dev Documents: Those lucky enough to have the Dev Documents in their Tier rewards will get a selection of various behind-the-scene files to enjoy. Note that there is a lot of very, very bad humour and french puns. Consider yourself warned. 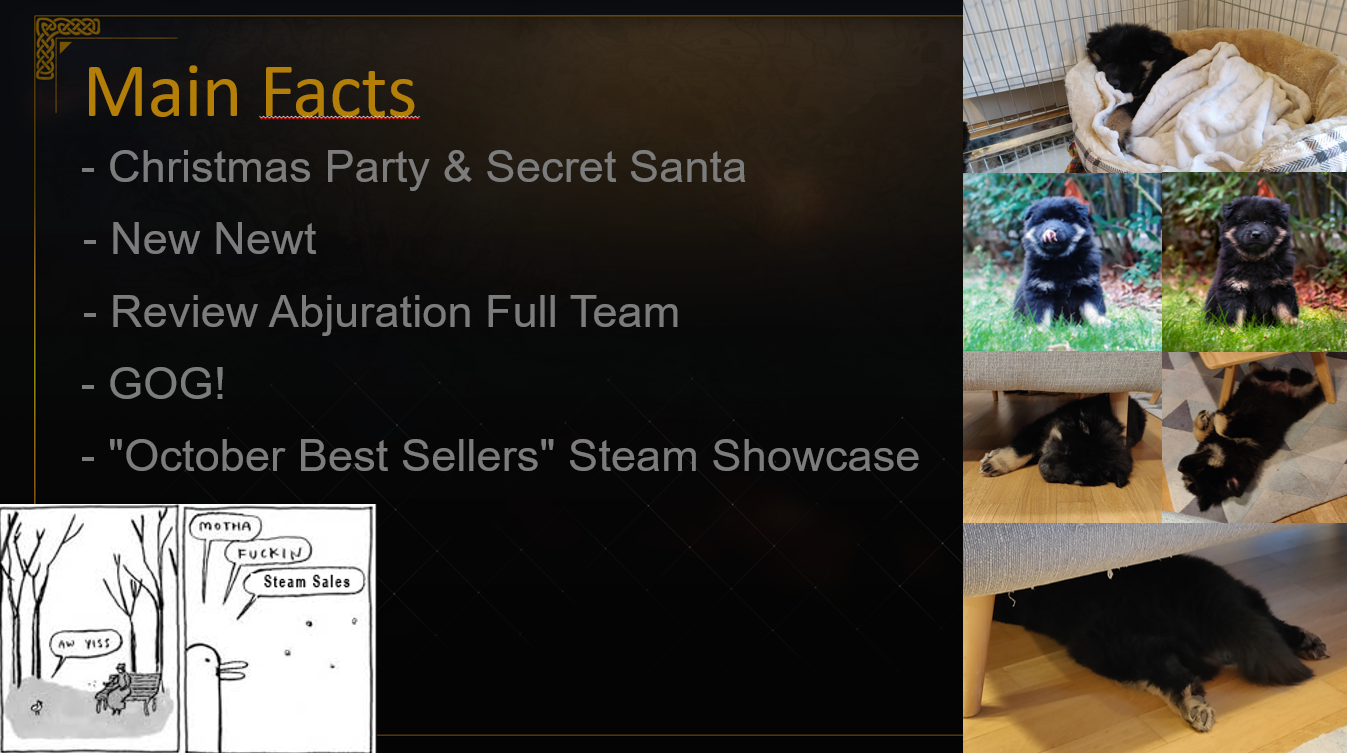 Yes, that is a legit slide from one of our bi-weekly internal reviews. We do love our pets and memes.

Backer Character Creator Names: Here is the backers' addition to the random names generated in the Character Creator. Note that they will only appear depending on the gender and ancestry of the character - and keep in mind that changes can always happen between now and the 1.0 release.

Backer Location Names: The 4 locations named by backers are the tavern (Gravekeep's Cask), the road between Masgarth and the Badlands (Copperhead Road), as well as two yet undisclosed locations (Sentharyllian & Hickory Corner Wood).

Backer NPC Faces: There are 2 NPCs whose face will be based on pictures sent by backers, but for now they are still being worked on!

Hey there chap, you know who you are! Or at least I hope...

Backer Magic Items: There are currently 2 magic items created by backers - powerful items that you will likely be finding later in the game. One of them, the Staff of Metis, has already been completed, while the other (the Cog of Cohh) is still being worked on.

Concept Art for different versions of the Staff of Metis

Backer Statue: There will be one statue in-game based on a backer. We haven't quite decided where to place it yet, but it won't be hard to find!

Testing different textures in-game with the statue, as it dates from before the Cataclysm

As a reminder, physical rewards will be sent within 3 months of the game's 1.0 release. This is still quite a fair bit away, so please bear with us!

Solasta Setting Sourcebook: Sporting a hefty 80,000 words, the Solasta Setting Sourcebook is currently being reviewed and edited before going into layout (to make it look good). With tons of information about the different factions and countries, the history of this broken world and its inhabitants - but also large sections covering the new Solastan archetypes and ancestries adapted to tabletop - this book should quench your curiosity regarding the setting in which Solasta: Crown of the Magister takes place. Take note that there will be quite a large amount of design changes in the gameplay sections compared to the video game in order to take into accounts the intricacies of tabletop implications, such as the ability to multiclass and balancing with existing archetypes in mind.

We can't wait to show you the final product! This is going to be fantastic!

Adventure Box: The Adventure Box, containing all you need to run the short level 1-4 adventure The Ruins of Carillach Gar, is also still being finalized. The 16,000 words (40+ pages) adventure booklet itself has already been reviewed and validated - and will soon be going into Layout. It will also include pre-made characters you know and love - Vigdis, Violet, Garrad and Rhuad, the party from the Kickstarter Demo The Ruins of Telema (which chronologically happens after The Ruins of Carillach Gar).

The Kickstarter crew is back in action! Of course you can also roll your own characters for this adventure if you prefer.

Paintings: A few backers will also receive a painting from our Art Director! Here is the first one he painted quite some time ago, our good old fighter Garrad.

I'm really impatient to see how the other members of the team will turn out!

And that's it! There are a few other rewards which we haven't talked about, such as the OST vinyl or the small magic items, but as we don't have anything to show for these at the moment we prefer not to clutter this already fairly long news!

The statue is so cute.

I wonder what lore you will set behind.

Joris followed me everywhere. Is this intentional?

what in the name of sorak ?