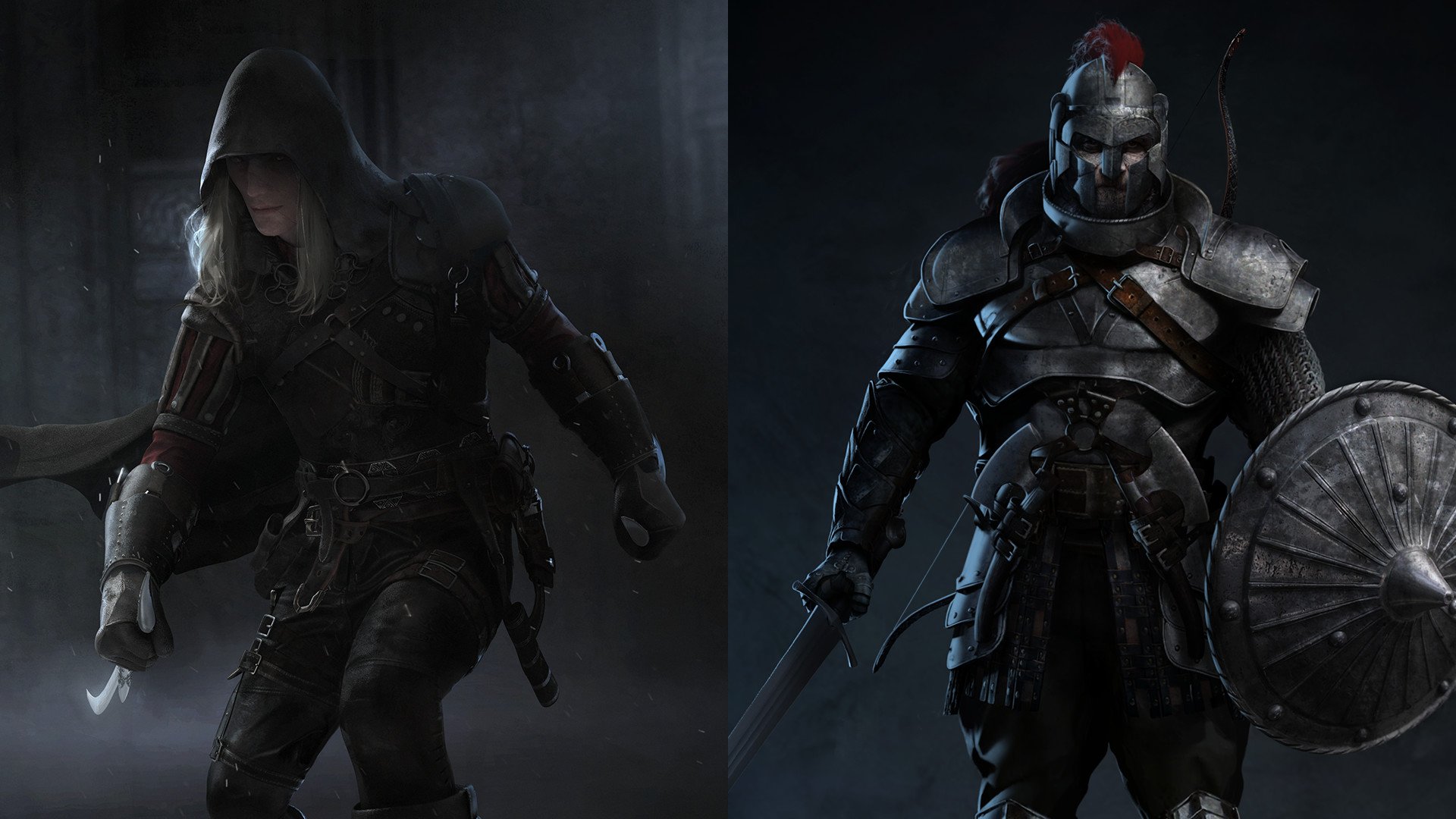 Those who survived the immediate effects of the Cataclysm found themselves plunged into a struggle for survival. Many different fighters and fighting styles emerged from the chaos that engulfed Solasta: nobles maintained armed bands to secure their lands, and every merchant house, temple, and town needed armed guards for defense. Each of the new nations had its favored troops, tactics, and equipment. In addition, there were some who made their living as adventurers or mercenaries, whose experiences shaped their fighting style in various ways.

As centuries passed, some styles proved more effective than others. Schools were founded to preserve and refine their traditions, each the product of different needs and circumstances. Here are three of Solasta’s best-known martial traditions.

Most of Solasta’s martial traditions have their roots in the elite army corps of the Manacalon Empire or the Tirmarian Inquisition. Mountaineers, though, are born out of the ashes of the Cataclysm. For generations, the Marches and the mountains that stand between the Badlands and the more civilized nations have been infested by orcs and other monsters. Many of these creatures make their lairs in dark tunnels, narrow canyons, and cramped ruins. This is the world of the mountaineer.

Mountaineers are specially trained to fight and survive in rocky and vertical environments. They are masters of the shield, which is as much a weapon as a protection in their skilled hands. A mountaineer’s shield can wound or knock down an opponent, and given a wall on one side and a shield in the opposite hand, a skilled mountaineer can be almost invulnerable. Their extreme mobility lets them maneuver in ways that can surprise opponents and give them a considerable tactical advantage. The greatest mountaineers can combine offensive actions into devastating chain attacks.

While mountaineers do not fit the ideal of the elegant, noble warrior, they are impressively efficient killers of Badlands monsters.

Spellblades' detractors often argue about who makes a better Spellblade: a failed wizard whose physical strength can be put to good use, or a reluctant fighter who's a bit too smart to be a good soldier. Those who choose this path, though, do not see it as one of compromise. They study magic as well as physical combat, and are expected to excel in both areas. Many training schools exist, with the most famous one being the Circle of Danantar in the Principality of Masgarth.

Spellblades in training learn to cast cantrips alongside their basic weapons training. Unlike many wizards, spellblades are taught to regard spells as just another weapon, and they restrict their magical studies to whatever can be useful in battle.

This dual focus gives them some unique advantages. For instance, they can imbue ordinary weapons with magic when necessary; and they can also strike enemies with magical force, pushing them back or even knocking them down. The most powerful spellblades are able to teleport in the middle of a fight, confounding their foes and becoming virtually uncatchable.

Champions are pure fighters who dedicate their lives to perfecting their martial prowess. Their physical training pushes them to the extreme limits of exhaustion, repeating moves and strikes over and over until they are both instinctive and flawless. Such dedication earns them superior fighting abilities. Champions are deadlier than most, able to deliver lethal strikes, and their understanding of battle lets them master two fighting styles when most fighters only use one.

Through their arduous training, champions develop remarkable physical prowess. An experienced champion is an almost unstoppable killing machine, and a formidable example for lesser warriors.

Rogues are unpredictable people. They are versatile, diverse, and full of surprises, all of which makes them hard to describe in a few words. Those who survive long enough can choose from a range of specialist paths that lead to very different careers.

Trained by a secret society that extends throughout the kingdoms of Solasta, Darkweavers have developed techniques to exploit darkness and strike fear into their enemies, and have mastered the arts of crafting and using poison.

They are mostly known for their uncanny climbing ability and their skilled use of the advantage of height. Firing arrows from above, they can strike down their targets with a brutal efficiency that most archers cannot match. They can also drop onto unsuspecting targets with lethal effect.

Moving unseen in the darkness or waiting in a shadowed corner of the ceiling, the venomous Darkweaver is evasive and deadly.

Trained in the arcane arts as well as in roguish skills, the shadowcasters are stealthy magic users, whose abilities make it almost impossible to guard against their attacks.

Able to cast cantrips and spells from a limited number of schools, shadowcasters can move in the midst of battle even more nimbly than other rogues, and this ability grows until they can actually teleport for short distances. Their defense against spells is also far superior to that of most rogues, especially at high level.

Masters of the shadowcasters’ discipline can cast spells in a similar fashion as their sneak attack, increasing damage when casting while remaining undetected.

As might be expected, thieves are mostly motivated by money, but that does not stop some of them from becoming audacious and wide-ranging adventurers, albeit with a very individual approach to the concept of teamwork.

They are skilled pickpockets and burglars, with a talent for climbing, stealth and improvisation. As they grow in skill, they become able to use items that they are not trained to use, intuiting their function by pure cleverness.