You were many to ask about Character Creation, as it was absent from the Pre-Alpha Demo on Steam. And for good reasons too! Tabletop RPGs wouldn't be half as fun if you were stuck with Pre-generated characters.

Today we'll be sharing with you our progress on the Character Creation Tool, which is currently being implemented by none other than our Creative Director (and CEO). Please keep in mind that a lot of what you will see is still work in progress, so do not make assumptions based on these images (like the number of races / classes displayed). There might also be some placeholders. But first, a word from the Boss (who's sitting at his desk tinkering with what you're about to see):

The Character Creation was actually the first part of the game I developed (more than a year ago, before the studio was established), in conjunction with the database of classes, races, etc. It made sense to start working on this first, as a good tabletop game starts with character creation. The complexity was to figure out how to handle all the possibilities of character creation in a unique interface. It was fully functional in our early prototype, then set aside as we focused on the Ruins of Telema and in-game features. Now that we are moving our focus towards developing the full game experience, our UI/UX partners FIGS have produced the gorgeous concepts that you see today. They know RPGs, but they are not SRD experts so there may be incorrect / temporary fluff in some screens. I have also started implementing this new design to enable the final Character Creation feature for the game.

I believe most of you will be very familiar with Character Creation works, though I'll still be explaining for those who may not know the system so well. You will first be selecting the Race & Sub-Race of your character, which will grant you Racial Features and Stat Bonuses. 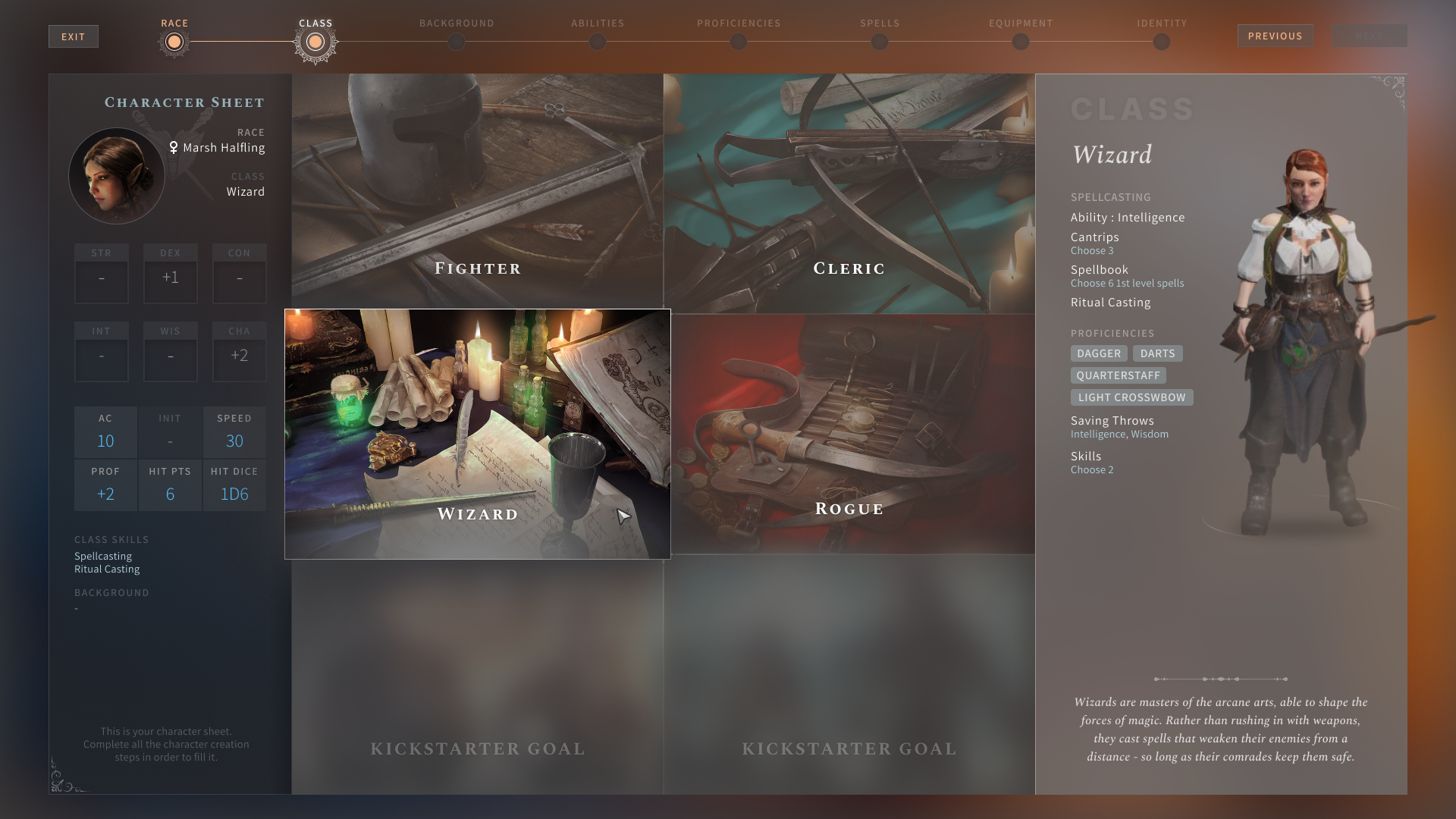 After that, you'll be choosing your Class. This will give you Class Features, Proficiencies and Saving Throws on top of what you already got from selecting your Race. Skills will be selected later down the line, and Spellcasting Classes such as the Wizard here will be selecting their Spells after that. 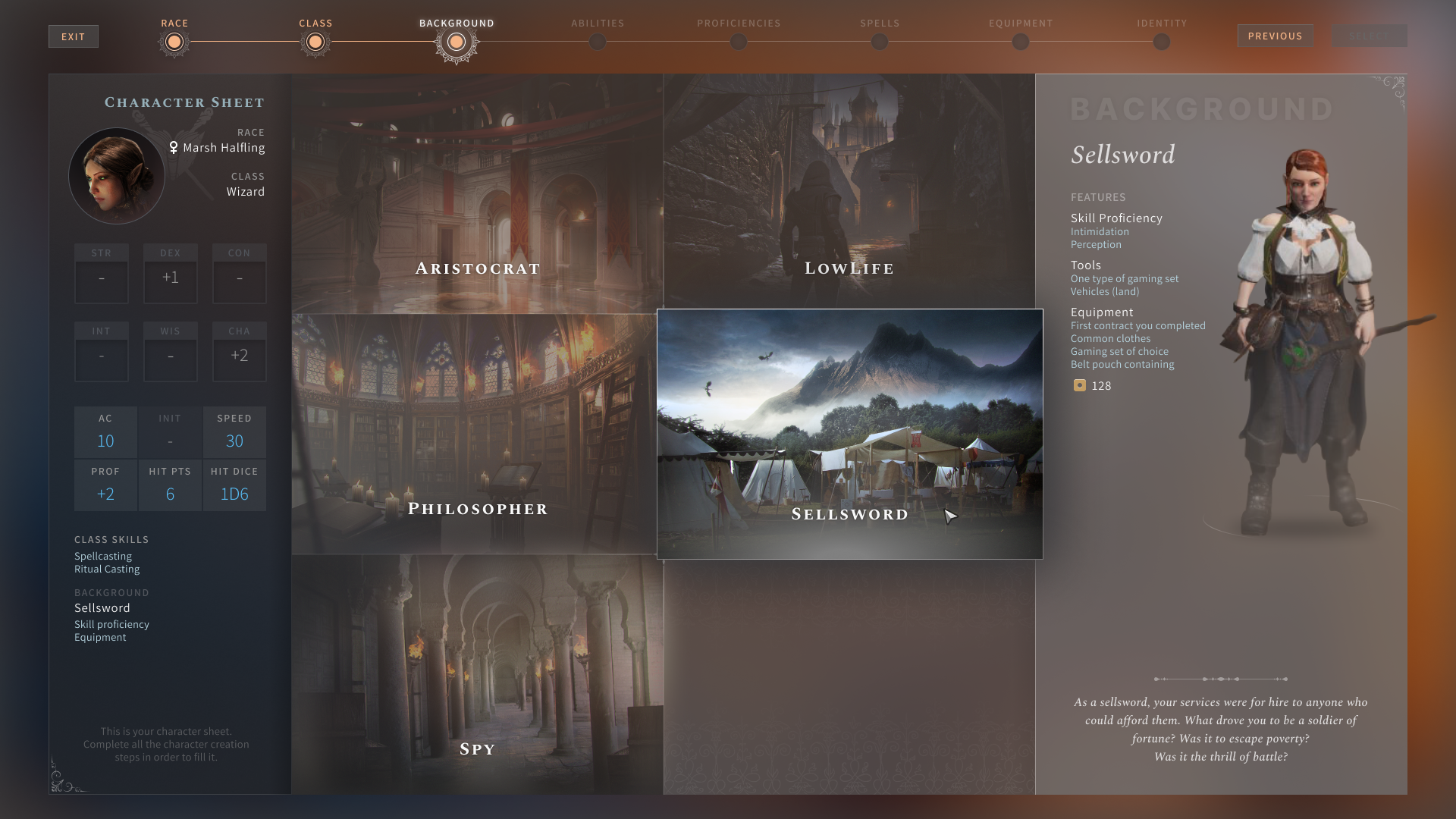 We're now reaching Background Selection. There's more to Backgrounds than the usual Bonus Proficiencies, Languages & Equipment. In Solasta: Crown of the Magister, Backgrounds will also be crucial in shaping your Characters' personality, giving them different dialog options in various situations. There will also be quests that are background-specific, meaning replaying the game with different Backgrounds may unlock different questlines.

Adding New Backgrounds thus means adding more Dialog Options & more Quests! Note that due to how Backgrounds interact with Personality, Characters in Solasta currently aren't allowed to share the same Background. That being said, remember that we're still early in the development cycle so design may change along the way!

You've been patient so far, now is finally the time to roll the dice! In the current system, we're using the standard 4d6 drop 1 - meaning you throw four 6-faced dice, keep the three best rolls and add them up to get an attribute score (rinse & repeat 6 times). And for those who like to "force their luck" we have an option to reroll the dice as many time as you want. It's a single player game, no-one will judge you. Maybe.

For those who want, you also have the option to use the Standard Array as shown here in the "Predetermined" option. Standard Array gives you a score of 15, 14, 13, 12, 10, 8 - which you can then distribute as you want in the different Attributes. 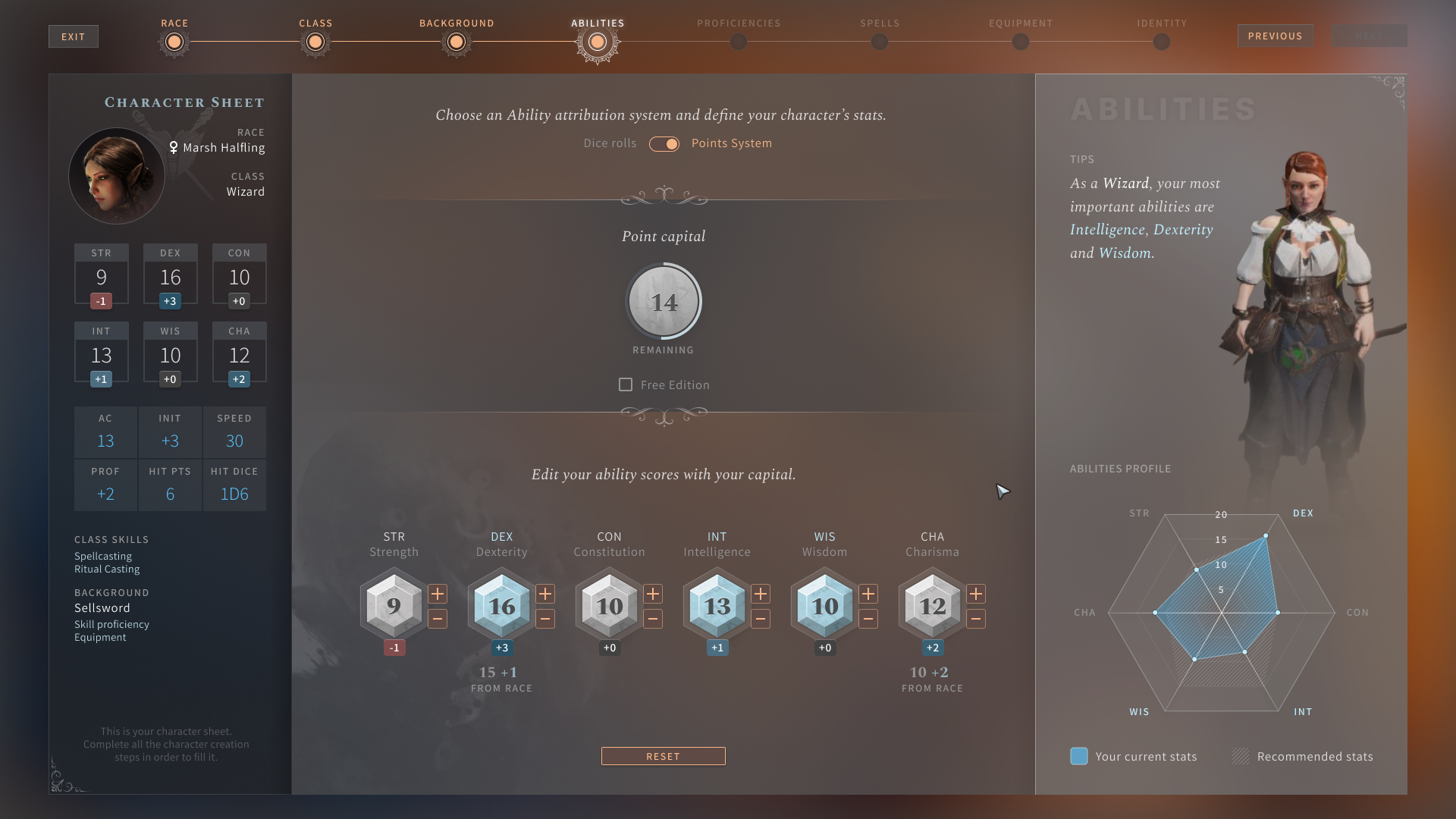 We also have the Point Buy System for those who prefer it that way. How it works is that all your Attributes start at 8, and you have 27 points to spend. You can't get an Attribute past 15 (before Racial Bonuses), and increasing one past 13 cost 2 points instead of 1 per Attribute point (so 12 -> 13 costs 1 point, but 14 -> 15 costs 2 points).

This is the end of our Character Creation Preview for today! We'll have more to show in the weeks to come.

Today we're featuring an adorable and fairly original Fan Art by Sarraiah: a cute Space Hamster holding a D20! The story behind it is fairly sweet - SpaceHamster is one of our most active community members in Discord, and there was a lot of discussions about Rangers & Pets. So... Space Hamster Pet. Note that while absolutely adorable, we have already stated that Pets are not currently planned for Solasta - and not even a cute drawing will make us go back on that decision. 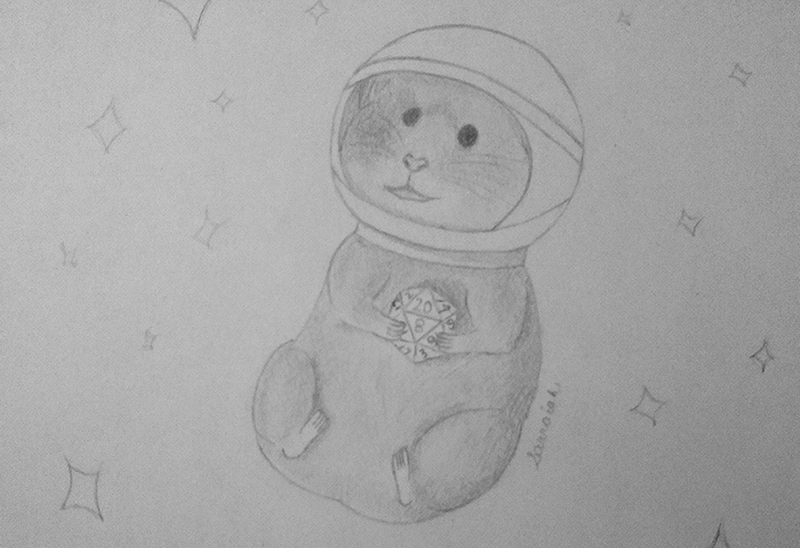 Now it's been quite some time, here is an update of where we're sitting at for the Social Goals! 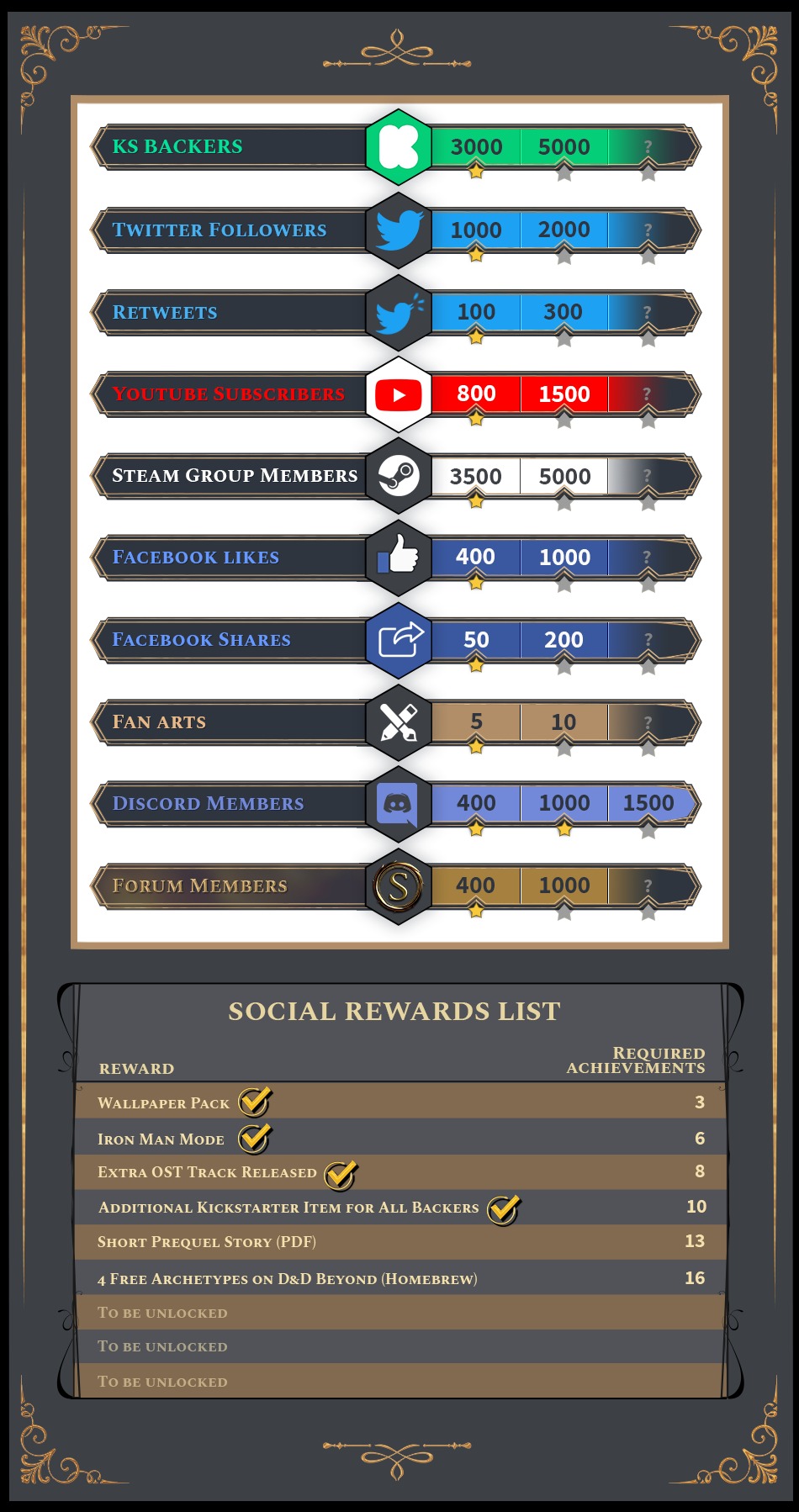