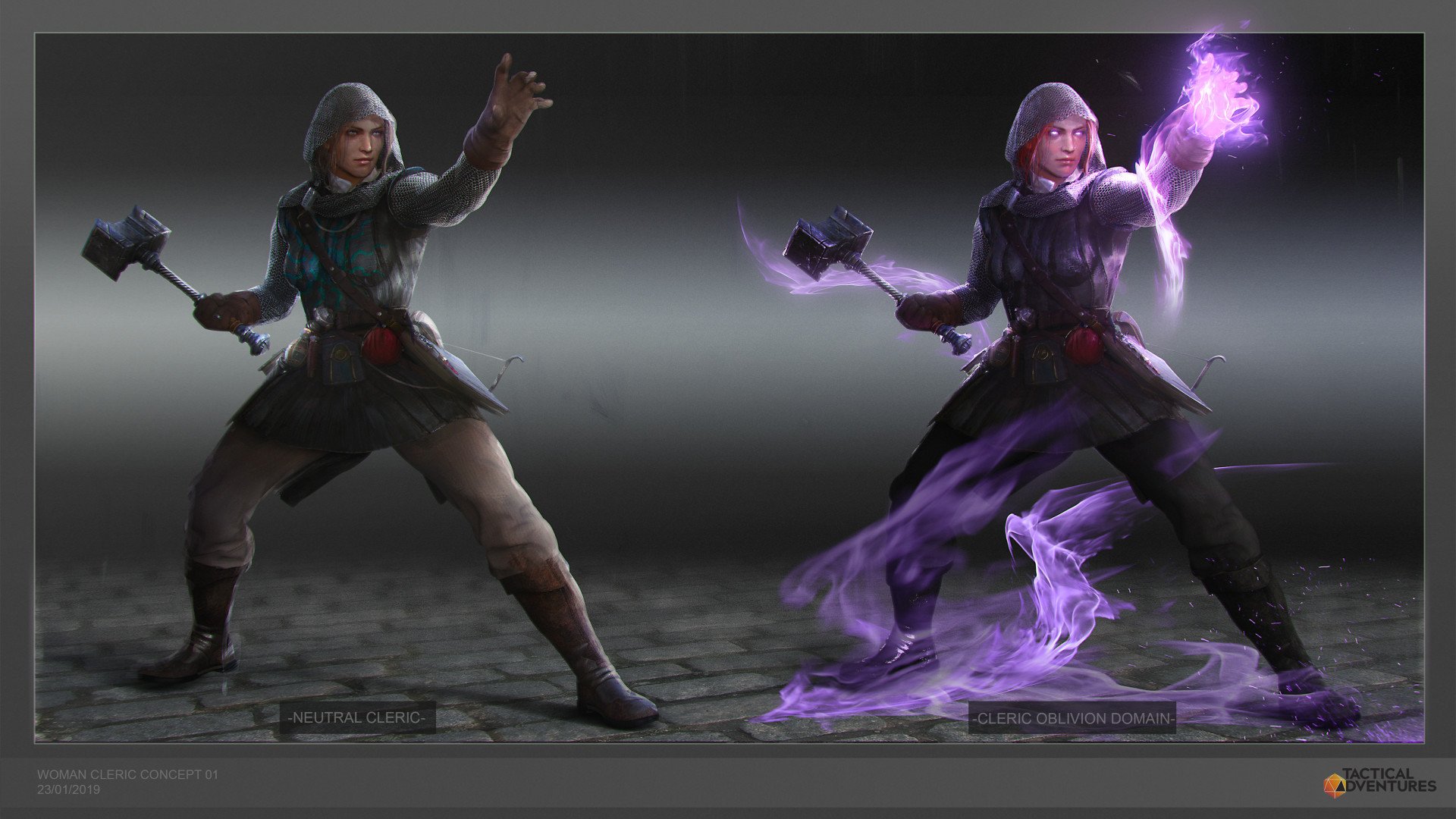 The Tactical Adventures crew will be holding an AMA (Ask Me Anything) on Reddit /r/games starting Thursday 26th at 7 am PDT / 10 am EDT / 4 pm CEST. Tactical Archimat (CEO & Creative Director), Tactical Zaz (Gameplay Director) and myself (Community Lead) will be answering questions live for at least 3 hours (and maybe a few more).

So don't be shy, come and ask us what you want to know! On another note, only 5% more to go and we'll be funded!

Unlike elves, dwarves, and halflings, humans are not native to Solasta. Their race appeared on another world, called Tirmar.

Humans are short-lived, and value the present and the future more highly than the past. After a millennium on Solasta their memories of Tirmar have become legends, studied only by priests and scholars. The high elves say that humans have three talents: multiplying, forgetting, and worshipping. 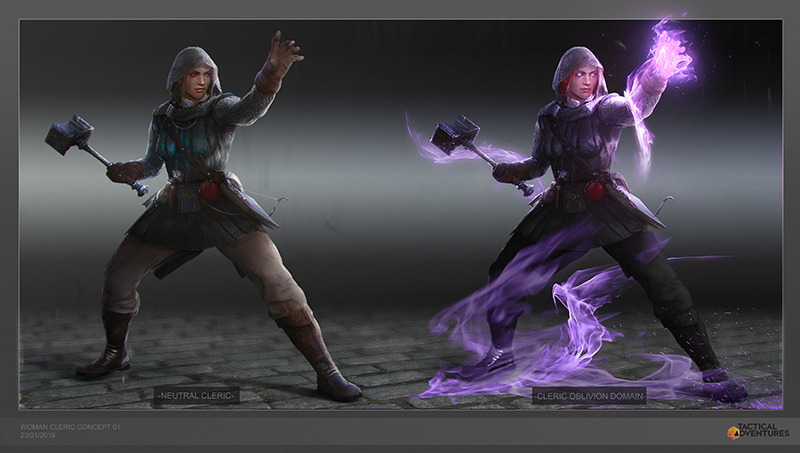 Where Solasta was a world of magic, whose peoples learned to shape mana using arcane spells and rituals, Tirmar was a world of gods. Instead of studying arcane magic, humans worshipped the gods, and strengthened them through their devotion. There were gods for every aspect of life on Tirmar, even for the darkest purposes. In return, they gained a mastery of divine magic.

Years of war and fear led to the birth of the Tirmarian Inquisition, an institution created to protect humans, but that ended up corrupting them instead. An evil god grew in power, threatening all that was good on Tirmar. Many gods left their homeworld with their followers, passing through the Rift to Solasta. Humans arrived on this new world, full of hope and praying for safety, but before they had time to settle, the Cataclysm struck.

After the Exodus and the Cataclysm, humans found themselves welcome across most of Solasta. Unlike the elves, they knew how to build, farm, and survive without magic, which was a great advantage in a mana-depleted world, and even their divine magic relied on the power of the gods instead of the mana of the world. 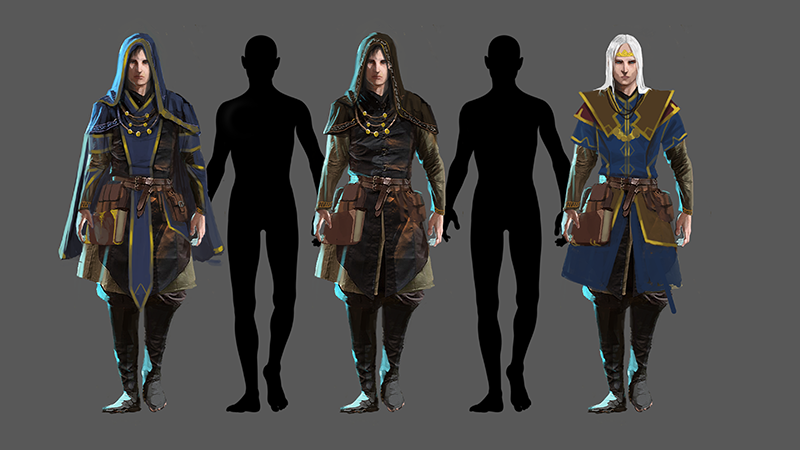 The humans and their deities became part of Solasta. They have been integrated into almost every nation, and some have become powerful, well established lords, wizards, or kings. They settled the majority of their population in Borealis and south of the Badlands, and are also numerous in Gallivan, the Snow Alliance, and the Principality of Masgarth.

Despite this widespread integration, a few humans still revere the old culture of Tirmar. In certain regions, these traditionalists preserve the old Tirmarian language through religious ceremonies and profane rituals. Scholars traveling in remote areas have encountered human villages where the pure Tirmarian language is still spoken, a thousand years after the Exodus.

Some elements of Tirmarian architecture have also survived, partly through the inexplicable workings of the Cataclysm that brought entire buildings from one world to another, but mainly because most temples on Solasta are constructed following the same architectural principles as their predecessors on Tirmar.

The Church of Einar, god of valor and fidelity, is the chief preserver of relics and stories from the past, from the rise of the Inquisition to the Exodus and the Cataclysm. Paladins of Einar swear an oath to Tirmar itself and devote themselves to following the tenets of the Inquisition, continuing the fight against the evil that cause the fall of Tirmar and that followers of Einar swore to never let rise again. We, at the Einarium, make sure the past is never forgotten. 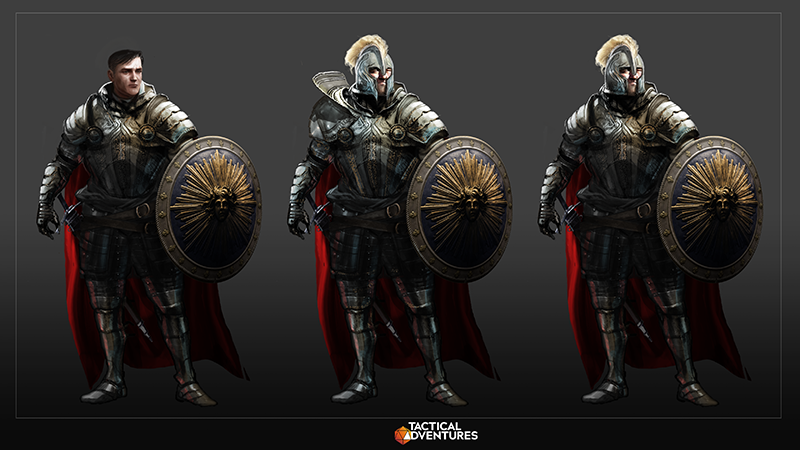 Humans are as diverse on Solasta as they had been on Tirmar, with a much wider variation in height, build, and coloration of skin, hair, and eyes than any of the Solastan races. On average they are taller than dwarves and broader than elves, with facial features that are not unlike those of halflings.

Scholars agree that there were no orcs on Solasta before the Cataclysm. They are also absent from the surviving human histories of Tirmar. They seem to have appeared in the aftermath: a new threat in a beleaguered world.

Some speculate that they came through the Rift from some third place, but the archivists of the Einarium are firmly against this theory. 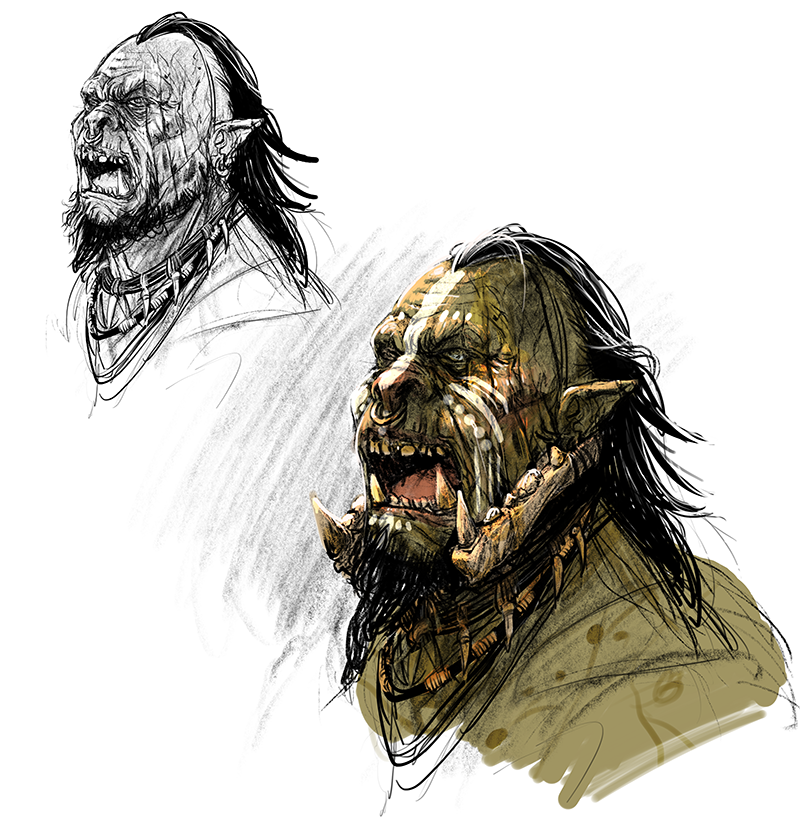 The truth is that the orcs are linked to the Cataclysm. Their story is a sad one, for their ancestors were proud Tirmarian humans. Members of barbarian tribes from the high, jagged mountains of Tirmar, they were fearless in battle, for their harsh environment fostered a contempt for death within them. While they respected the Tirmarian pantheon, each tribe also venerated a totem animal, typically one renowned for its strength and ferocity. They made ideal shock troops, and the Tirmarian Inquisition regularly sent them into the toughest spots.

As the Cataclysm unfolded, the Bear Brothers and the Snow Lions fought on the front lines, side by side with the Imperial Iron Legions. Heedless of casualties, they slowly forced the enemy back so that the Imperial wizards could come close enough to close the Rift.

As the rift closed, the enormous strain on the mana of the land had a devastating and varied series of consequences. All know of the centuries when there was not enough magic to cast even the simplest cantrips; of the earthquakes, floods, and famines; the cold and the drought – but the fate of the Tirmarian barbarians was crueler still.

As the Rift closed, a backlash of magic engulfed the front lines, wiping out the Iron Legionnaires. For some reason, though – their human physiology, or their unyielding barbarian toughness – the Tirmarians survived. However, they were no longer human. The twisting magic ripped through their bodies, turning human intelligence into orcish ferocity and barbarian honor into monstrous bloodlust. The men and women were transformed into half-beasts, warped parodies of humanity’s basest instincts. 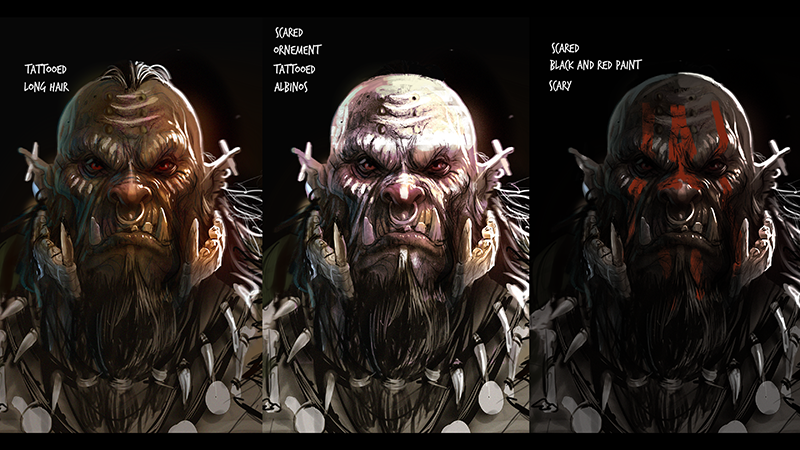 Over the days following the battle, the transformation became complete and the survivors began to move away from the Rift. They called themselves orcs, from the dim memory of a word in the mountain dialect: urrak, meaning strong or capable. Strength and capability had become the only virtues they understood. They wandered the land looting and killing. Many became cannibals, eating the bodies of their fallen foes as much to show dominance as to satisfy hunger. As they spread across the ruined world, sub-groups gathered behind particularly strong leaders, sometimes taking over a tribe and sometimes splitting off to form a new one. Tribes fought whenever they met, but all followed the violent orc way and all would band together against a foe who wielded the hated power of magic.

In time, the orcs moved out of the Badlands and into the Marches. Occasionally a tribe will grow strong enough to raid civilized areas and bring back captives as slaves or as food. Even less frequently, a cunning leader is able to forge a temporary alliance of tribes for the same purpose, but orcs are fractious by nature and such alliances seldom last long.

With strongholds in the mountains that separate the Marches from the Badlands, each orc tribe developed its own form of orc culture, fully orcish and yet distinctive, as each tribe forged its own path.

Although orcs share a common hatred of magic, their shamans wield a quasi-religious power through pacts with local spirits. They strive to prevent clan rivalries and petty feuds from developing into all-out war, often by organizing ritual combats between the champions of both sides. These fights sometimes settle a dispute, but just as often the losing side resorts to war rather than accepting defeat. 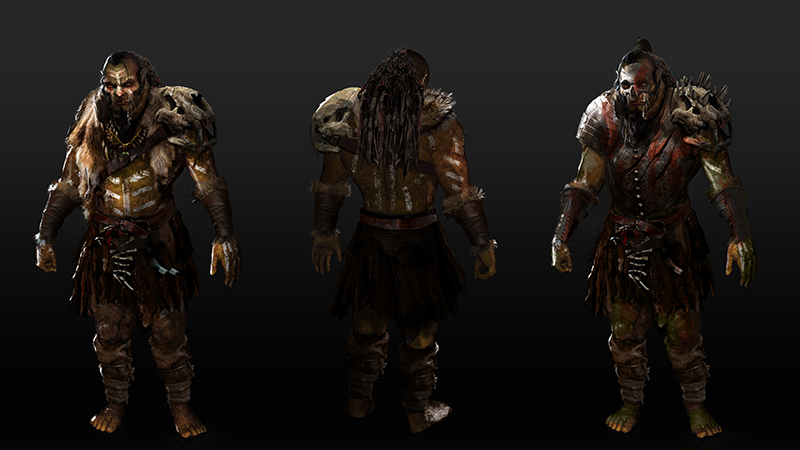 Although other races regard them as savages, orcs do have a culture, however barbaric. Orcs define themselves by their clan. For an orc, being clanless is, in many ways, worse than death, and in many clans banishment is regarded as a harsher punishment than execution.

As well as identity and protection, the clan provides structure and order. In the chaotic environment of the Badlands and the Marches, these are things that orcs crave. Each orc has a rank and a place within the clan, with superiors, inferiors, and duties. Ambitious individuals scheme to improve their position, usually under the watchful gaze of the tribe’s shaman.

Orcish mercenaries are occasionally hired by Solastan employers, most often the petty warlords of the Marches rather than the rulers of the more civilized nations. They are generally employed as expendable shock troops as well as for those unsavory tasks which might cause their employers’ regular troops to mutiny. A clanless orc takes surprisingly well to the mercenary life, with the mercenary band filling the role of the clan in providing security and structure. The colors of a mercenary company usually ensure that orcs are not taken for raiders and killed on sight, and as harsh as mercenary discipline can be, it is seldom as brutal as life within an orc clan

Orcs are of a similar size and build to unusually large and muscular humans. Their skin is a dark olive green in color, and often decorated with clan tattoos and brands. Their hair is usually black and coarse. Their jaws are heavy and their teeth are large, with especially pronounced canines.

Even though the Cataclysm destroyed much of their humanity, orcs retain a notion of classes and professions, and they are encountered in greater variety than most other monsters.

Orc archers are not as strong as fighters, but make up for that with cunning. Their skill with bows, makes them effective hunters and secures them a place within the tribe. They sometimes use poison on their arrows, usually to subdue or paralyze rather than to kill.

Orc Shamans pray to the totems of their clan, keeping the ancient animistic traditions, albeit in a dark and twisted form. Shaman spells are based on divine magic, but shamans do not specialize in a particular domain. Indirectly, and unknown even to the shamans themselves, their prayers are answered by Arun in one of his more primitive manifestations.

Orc Chiefs are almost always the biggest, strongest, and most brutal members of their tribe. Most are more intelligent than average, and possessed of an animal cunning that serves in place of education. Having the first choice of any loot (or rather, the strength to take anything they want from anyone else in their clan), they usually have better armor and weapons than other orcs. As a sign of prestige and power, some orc chiefs employ ogres as a personal guard.

Support us on Kickstarter