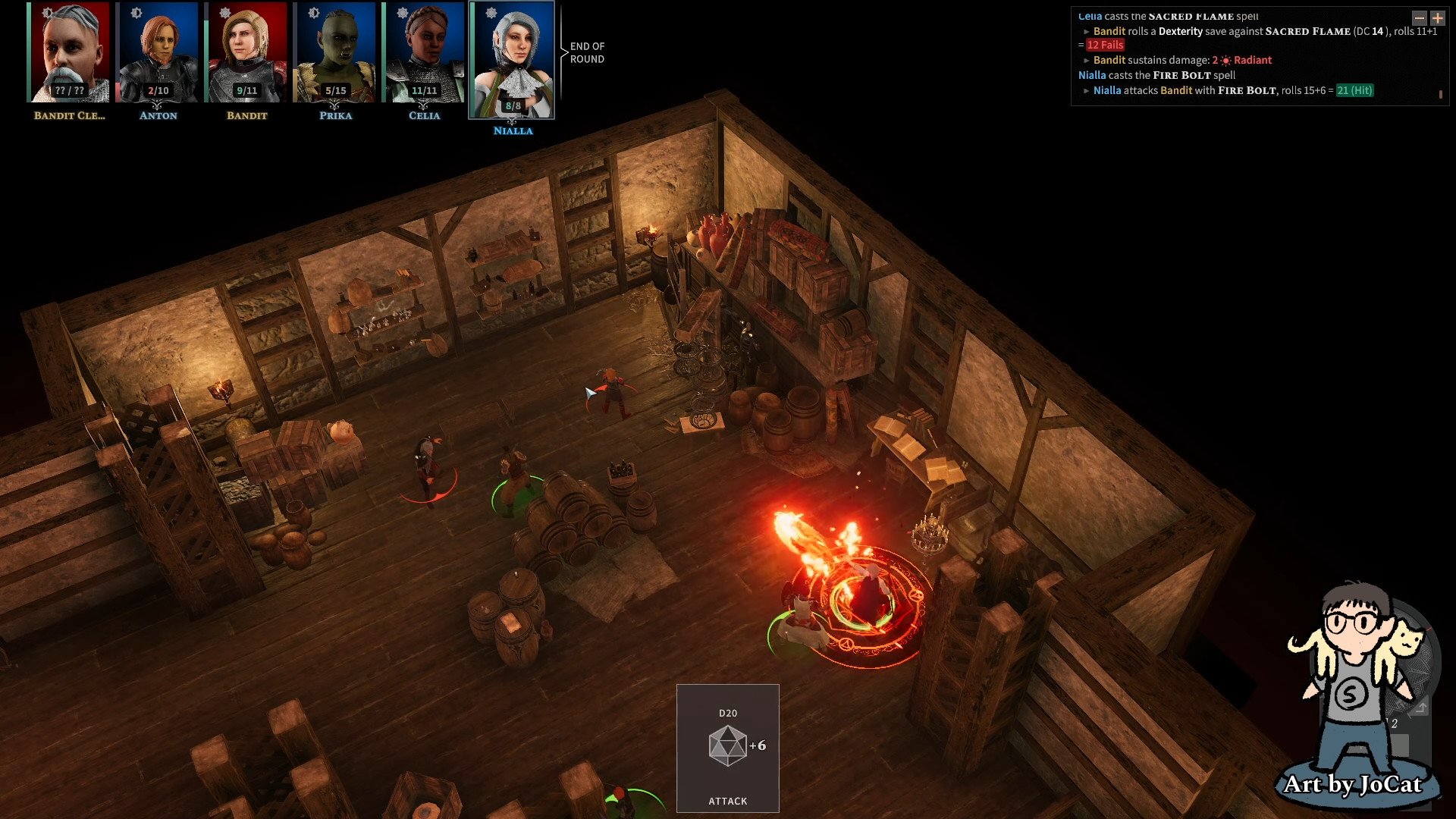 Thank you all for joining our Dev Stream yesterday, it's been a real blast chatting with you - we should definitely do this more often (as soon as we have more time)! For those who could unfortunately not be there, here is a VOD link for you: https://www.twitch.tv/videos/1263120461 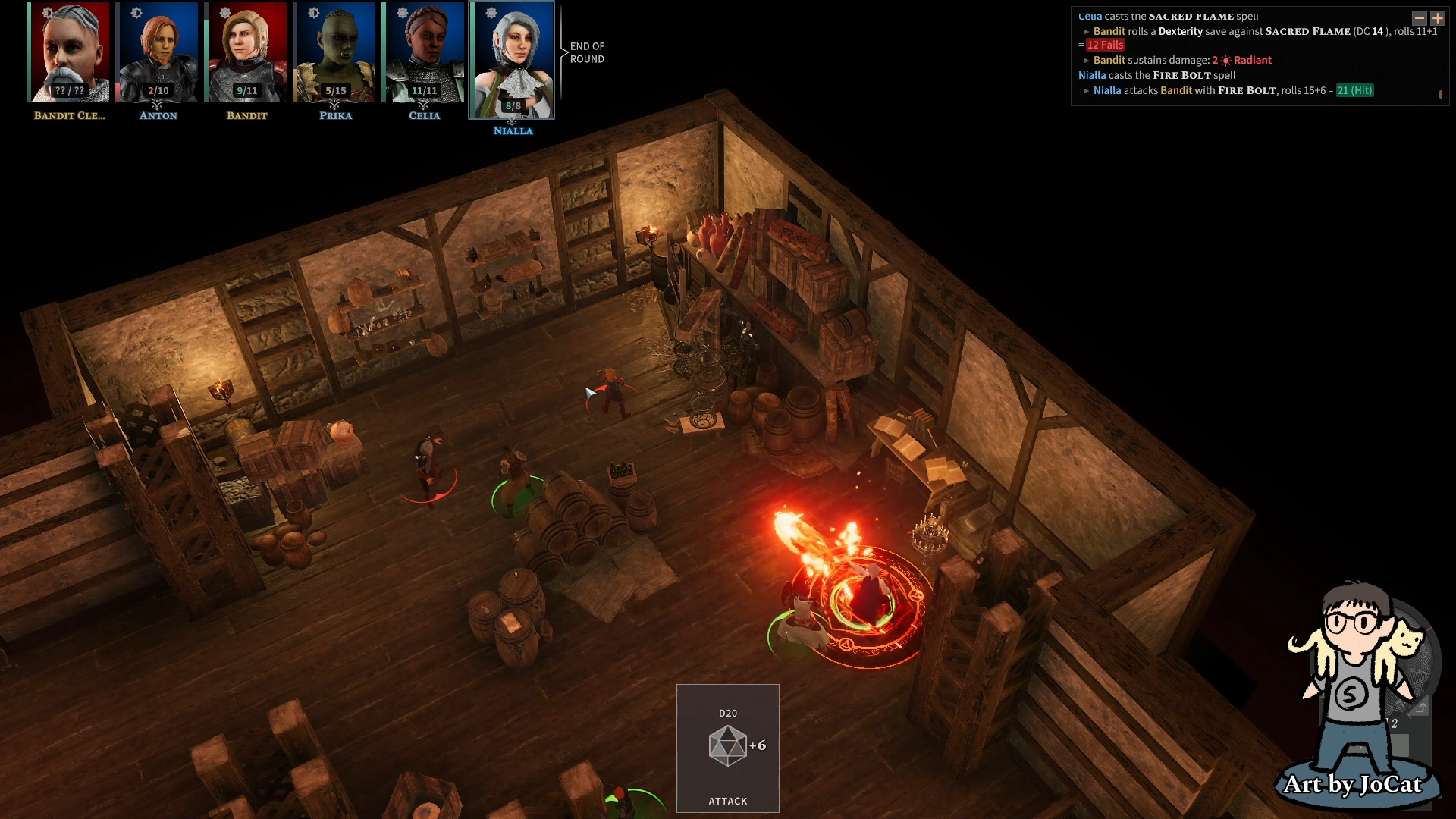 Additionally, thanks to a brave soul named Mastani, we have a recap of all questions & answers in text form as well! So if you don't feel like sitting through 2h of me going off tangents, here is all the juicy info in a bite-sized format.

Q: Are you hiring?

A: As our current studio’s philosophy is to stay relatively small, we're not hiring at the moment. Also keep in mind that we are a French studio, so you would need live in France & speak French fluently to join us^^ That said we do have English partners so you could end up working with us on Solasta or one of our future projects!

Q: Will there be future opportunity for voice acting?

A: There will be new voiced lines in the next DLC, but we work with an audio partner when it comes to Voice Acting - so we rarely pick up specific voice actors ourselves (mostly due to logistical reasons).

Q: Will you do a crossover with Amplitude to do an Endless Dungeon?

A: I don’t think so, though we never know what the future holds.

Q: Do you have any stats about the most/least popular classes/subclasses?

A: I don't believe we have those statistics. Unity is fairly limited in what we can collect :(

Q: Will the setting book that was part of the Kickstarter be available in the future?

A: As much as we would love to, we currently can't for legal reasons. That said if it ever changes in the future, we will make an announcement.

Q: Would you be open to community collaborations to improve translations?

A: We are aware of certain translation issues (in Russian for example) but due to potential complications with French laws regarding free labor we'd need to check that up first.

Q: What will be in the DLC?

A: Although we don't want to reveal too much about it for now, here is some information:

•    A full new adventure in the world of Solasta. The previous DLC focused on new classes. The goal this time is to offer more content.

•    The story will take place somewhere different than Crown of the Magister.

Q: When is the DLC coming out?

A: Hopefully in a few months, stay tuned to social media for the announcement.

Q: Will we be able to create quests in the dungeon maker?

A: It is something we are working on (quests, dialogues…), we hope to release it at the same time as the DLC.

Q: Will there be new races or classes in the new DLC?

A: No, there won’t be any new classes / races in the next DLC - as stated above, we focused our efforts on making a new adventure this time. That said there will be additions on the gameplay side in the character creator...

Q: Do you have plans on increasing the level cap?

A: Not for the next DLC. Just like adding new classes, adding new levels is very time consuming. We have 9 classes (all with sub classes) and it would require for each to add new effects, new features…

Q: Is there a chance we can get some more magical weapons?

A: There will be some more magical weapons coming with the DLC, but ideally we'd like to make some more if we ever get some time to do that.

A: Although it isn’t impossible, it’s very hard to balance between not enough and too much - remember that RNG also plays a large role in each player's experience. For the moment, we don’t plan on tweaking the main campaign (Crown of the Magister) because any small change can have cascading effects.

Q: Any information about multiplayer (possibly in the DLC)?

A: We won’t be speaking about multiplayer today. If there is anything regarding Multiplayer, it would be in an official announcement.

Q: Do you have plans to add an option to stop your travel and turn back once starting a travel and / or the option to modify our equipment when we travel?

A: For inventory, it should work, as for turning around it has been asked for a lot but would require reworking the whole system. We thought about it but as it added a risk of breaking the campaign, we preferred to avoid it.

Q: Are you still considering working on some UI QoL features, like showing attack/spell success odds when AC/stats are unlocked in bestiary?

A: That actually is more than just QoL, it would be a design choice. On tabletop you do not have percentage displayed when rolling against a goblin, if you know it has 11 AC - so adding percentage would make it more "video-gamey" (although there is nothing inherently wrong with that).

Q: Are you planning to get the custom background displayed on Inspection panel?

A: We have talked about it; I’ll have to check where it’s at.

Q: Will multi-classing be a thing?

A: No, as it would create too many complications and would be too hard for Q&A. It will stay in the domain of mods.

Q: Any update on props/weathers/FX in the DM creator?

A: No, we don’t have active weather effects in game, the ones you can see (for example in the Dark Castle) are baked into the level. It might be possible for smoke to be added as a prop, but not rain on a whole level.

Q: Are there plans to bring more accessibility to the game like larger tooltips and UI scaling?

A: Would like to but it may require us to revamp part of the system. It's not a quick addition, but it is being discussed.

Q: Is there a plan for Apple M1 optimization in the future?

A: For anything Mac related, we had partners work on it so please send us a mail with as much details and information as possible so it can be transferred to Q&A.

Q: Will there be new voice acting for the playable characters in the DLC?

A: No, as it would require the new voice actors to record all the lines of the Crown of the Magister campaign as well - and that's very expensive!

Recap on the Dungeon maker module and future upgrades:

The dungeon maker started as just one map with multiple rooms. To make full campaigns and avoid the players having to download all the individual maps, the campaign tool was developed to allow the linking of maps. Coming up in the future is the ability to add custom monsters, NPCs, merchants and items. The goal is to add custom dialogues and texts but the goal is to keep the tool simple to allow the maximum of people to use it. The fear of making something too complex is that too few people will use it.

Q: Is it possible to add a way to create custom classes or races?

A: Might already be possible via mods, we don't plan to create such a tool ourselves.

Q: Why do you limit to tile set in the dungeon maker instead of allowing a mix and mash of everything?

A: The short answer is: optimization. The more assets you put, the longer the map will take to load. There are mods which allow you to that but as devs we have to ensure the game is stable and doesn’t lag out for people with the minimum configuration settings.

Q: Some spell requirements are tricky; would it be possible to add notes about them?

A: The problem for us was to strike a balance between giving the players the necessary knowledge in the tutorials without overloading them with tooltips and such. Also, D&D rules hard :(

Q: Have you thought about making the game more re-playable?

A: It’s a problem with RPGs, even if you make several branching paths and endings, few players will actually replay the game to see them all. Supergiant had this issue with Pyre when starting to work on their next game (the fantastic indie that is Hades). That is why roguelite games are huge right now, they are made with replayability in mind (instead of simply encouraging it).

Q: Why was the bright blue (aqua?) hair color removed when the game left early access?

A: The easy answer: it could have been removed by mistake. The other might be that our art director did a check before 1.0 and determined that it didn’t fit with the characters (remember things can change a lot while the game is in EA)

Q: Would a native Linux version be possible (or PS/Switch/…)?

A: Adding another version to maintain is extremely consuming (and more so with the multiple Linux OS). At some point the company has to make a business call between spending time to maintain the version and working on content.

Q: Would it be possible to add more verticality in the dungeon maker tool?

A: Yes, under the form of assets, but not in a “free build” mode as past experimentations revealed that it's fairly easy to “break” the camera. It still is a thing we watch out for when designing future content.

Q: Why did you design your dragons as they are in game?

A: We didn’t want to copy paste the dragons from the monster’s manual because our license technically doesn’t include that manual so we had to design our own.

Q: Would it be possible to add a world map maker in the campaign creator?

A: We are thinking about it but we haven’t decided to work on that yet.

Q: Why did you choose Unity over Unreal?

A: Unreal is much harder to work with and it isn’t necessarily adapted for the same things. While it would be possible to do Solasta in Unreal, it may not be worth the effort.

Q: Could we have a manual dice roll feature?

A: It would require too much effort for too few people.

Q: Could you add animals like bears or horses to be NPC in the campaign?

A: We currently can’t add monsters as NPCs but we're looking at it. As for horses, I don’t think we even have them in-game so... no.

Q: Can we have feature where NPCs can turn hostile?

A: Currently no, the reason being that that NPCs aren’t monsters (they don’t even have stats as far as I know), so even if they turned hostile they wouldn’t be able to do anything. We're trying to homogenize that.

Q: Any chance the enemy AI can be updated to handle stealth better?

A: To make stealth work better (and less “cheesy”), we would have to overhaul the stealth system and that would cost us too much time… only for players to find new exploits, which would bring us back to square one. Most game with stealth can be cheesed if you look hard enough!