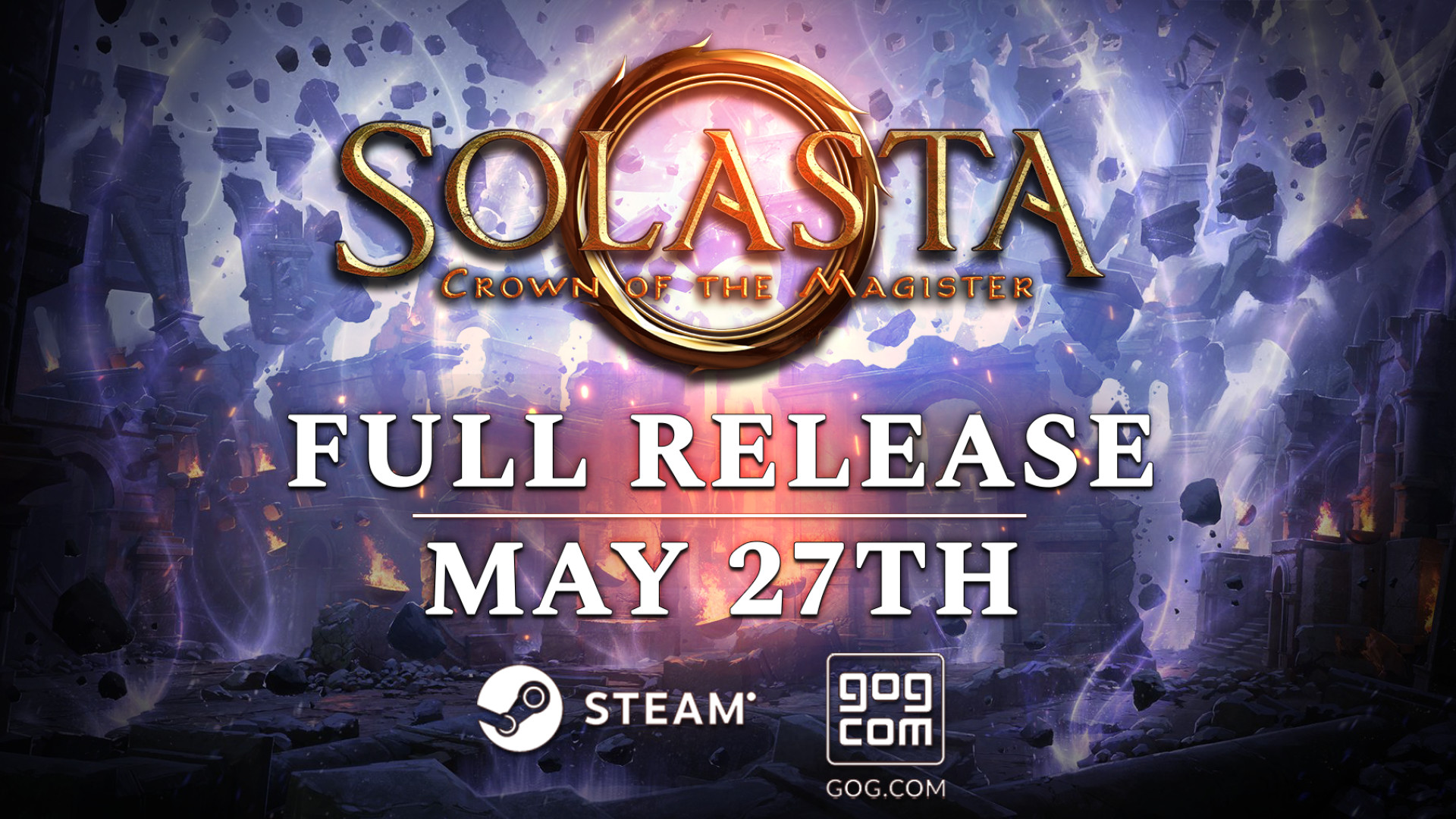 Hey there folks! We weren't lying last week when we said that you'd get to know the launch date of Solasta soon :D 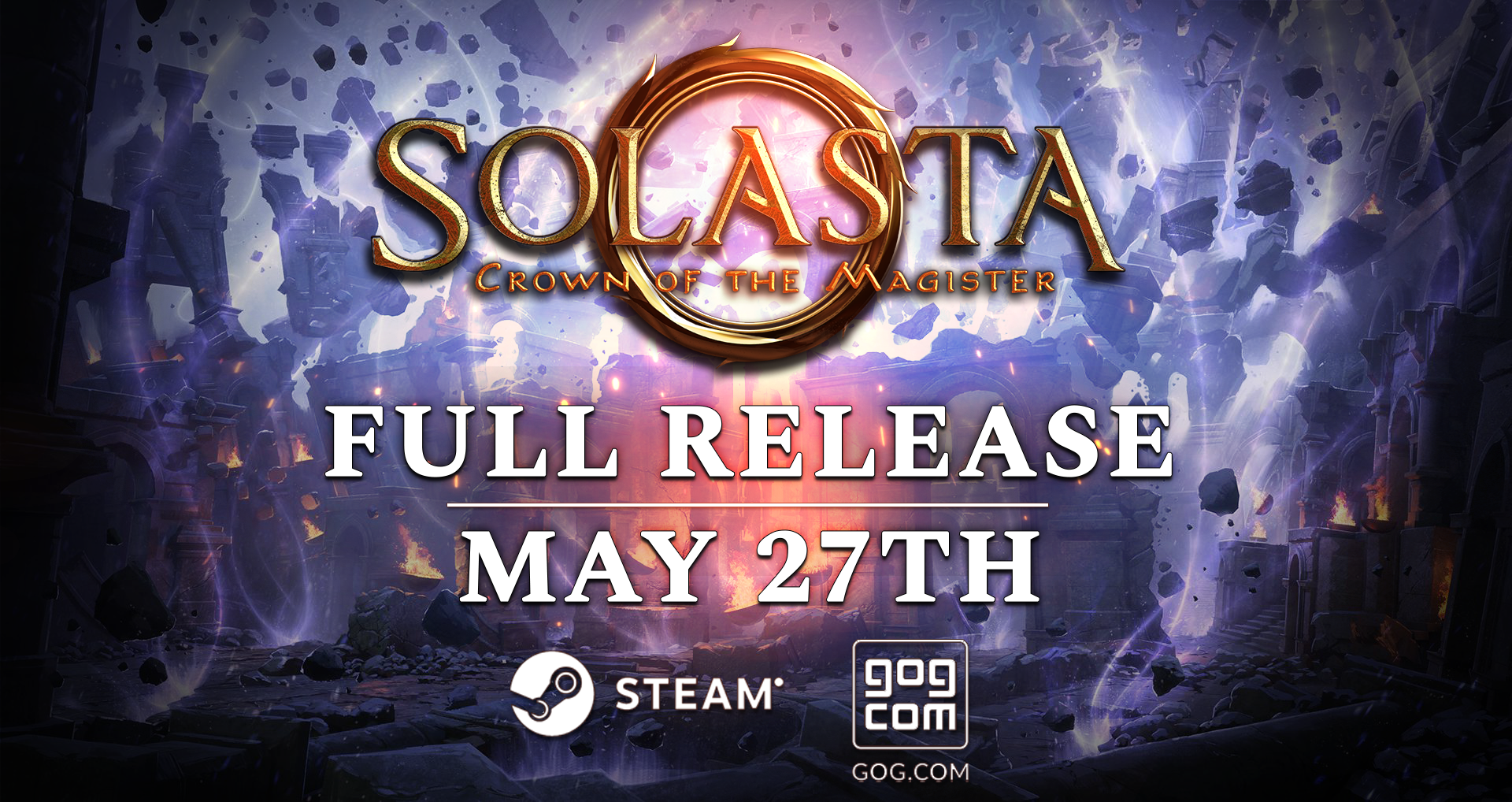 On May 27th 2021 after a little more than 7 months in Early Access, Solasta will finally launch its 1.0 version with all the promises made during our Kickstarter Campaign! What a ride it has been, from the small prototype made by the hands of Mathieu Girard (our CEO and Creative Director) in Summer 2018, to the core team of Tactical Adventures shaping up end of 2018, to our Kickstarter Campaign and Ruins of Telema Demo in Summer 2019, to our Early Access launch in Autumn 2020... all of this leading to full release in Spring 2021!

And we wouldn't have made it this far without you, our community, supporting Solasta in your own ways - whether by backing us on Kickstarter, buying the game on Steam / GOG, giving feedback and reporting bugs to help us improve the game, or simply talking about Solasta to your friends! To think that our Discord server, which had less than 200 members when our Kickstarter started now has grown to 5,500 members. Our tiny subreddit with 12 subscribers is now nearing 2,000 subs. And we just passed 3,000 Steam reviews and 45,000 members on the Solasta Steam group!

We'll have more exciting news leading to the final release of Solasta: Crown of the Magister - so keep an eye out for more information!

Since we've announced that our next update would be the 1.0 launch of Solasta, we've seen a lot of questions going around. Considering not everyone has been on the Solasta train since our Kickstarter Campaign, we thought it'd be best to tackle them in a little FAQ so that people know what to expect from the full release of the game!

Will I need to buy the game again if I already bought the Early Access version?

No, of course not. If you already own Solasta: Crown of the Magister, it won't vanish from your library at launch - you will simply be prompted to download an update which will upgrade your Early Access version to the full 1.0 version.

How long is the game going to be at launch?

Originally we were aiming for around 40h in total, sidequests included - but that number will depend heavily on your playstyle and the difficulty setting of your playthrough. For instance, for those whose Early Access runs already took 30h, you may not be finishing the entire game in 40h - there is a quite a bit of content that was not included in the Early Access version to avoid spoiling the main campaign too much!

Indeed, it has always been planned that the level cap would be level 10. We've announced from the start that you wouldn't be able to go past level 10 in our first game at launch. There are quite a few reasons for that, as each additional level would require:

So we always knew and said that level 10 would be the limit, given the scope of Solasta: Crown of the Magister. Which doesn't necessarily mean that the level cap will forever stay at level 10 post-launch!

Why are certain D&D classes like Barbarian and Bard missing?

Just like with the level 10 cap, we've been clear from the beginning that the 6 classes available at launch would be the Fighter, the Rogue, the Wizard, the Cleric - and the two classes that were added through the Kickstarter Stretch Goals, the Paladin and the Ranger. There is also a 7th class that has already been announced, the Sorcerer, who will be available in a free post-launch DLC for everyone.

As for the other classes, they may be added in future DLCs but we don't want to make any promises before the game is out. That said, trust me when I say that we want to have them in Solasta as much as you do!

Where is the Battle Master Fighter? The Vengeance Paladin?

Remember that Wizard of the Coast only granted us a license to use the SRD 5.1, not the full D&D license - meaning that we can only use what's in the SRD 5.1. This includes the vast majority of the tabletop ruleset and most of the classes, races and spells - but only one subclass for each class. This is why you won't find certain official archetypes, feats and spells in Solasta - which we replaced by homebrew content linked to our own setting.

Will my Early Access saves be compatible with the 1.0 version?

We are doing our best to not break save compatibility, so you should be able to play the 1.0 version with your existing post Spring Update saves.

Should I start a fresh run at launch?

Yes, we heavily suggest you start a fresh run as we will have made many changes between the current Spring Update EA version and the full 1.0 release!

How complete be the game at launch?

Solasta will be fully complete at launch! As stated before, we have always been very transparent about what would be in the final version of our game, and you can track our promises back to our Kickstarter Campaign from 2019 - so you can go back and check if you want to.

We know some people have been burnt in the past by Early Access titles that had to release in their current state because they could no longer afford to continue development, but we can assure you this is not the case here - otherwise we wouldn't make so much noise about our upcoming launch, would we!

Can we expect further updates after that?

While we don't plan on adding more content to the campaign, we do intend to make sure to keep an eye out for bugs, balance issues or popular improvements requested by the community - we're not going to suddenly disappear. Also, because the Dungeon Maker is a recent addition to Solasta, it will still be in Beta at launch - meaning we will be doing some Dungeon Maker upgrades as well post launch.

Depending on how Solasta performs, we might also work on some paid DLCs - but we have a game to finish first before thinking about that!

Do you plan on supporting additional languages?

We can't promise anything for now - our four languages at launch will be English, French, German and Simplified Chinese. That said, we did spot that some community members started to work on a fan translation mod in Portuguese, so you may want to check the modding section of our Discord Server if you want to know more.

Are you going to improve facial animation?

We did rework some of the mugs we had in our Character Creator, but the visuals and animation for our character faces won't change drastically. Keep in mind that we're not a story-focused RPG, but a Tactical RPG - where combat is one of our key focus, just like in the X-COM series.

Will you release Solasta on other platforms?

Solasta: Crown of the Magister is currently available on PC, but we did plan to have a Mac version developed post-launch. We unfortunately can't commit to a Linux version - unfortunately the Linux player base is simply much too small for a port to be affordable. As for consoles... we'll have to see how it goes!

Fantastic news, can't wait to play full game. Thanks again for such a great game, love it so much..

Fantastic! I'm looking forward to it :)

Im an avid older gen gamer and have been waiting for this full release with huge anticipation. Cant wait !! Great game

It is now May 27th, at what time can we expect the update?

Live on the East coast what time will the full version be available?

aint it sad.. lack of patience all round (me included), been scanning the site, and (re)loading the game since 8am this morning... guess that means I'm hooked!

I'm assuming from what I have read that further levels (11-20) will not be added post-launch? A bit disappointing but as you have said that does require time and money but hopefully it can be something that can be added in the future :)